I'm in America. The land of poor snacks and fat people. Here's a little post I wrote for another blog that is somewhat defunct. I thought I'd include it here. I'm gonna eat the hell out of Thailand when I get back...

Back home there are two very popular Thai dishes that just about everyone knows: Phad Thai and Tom Yum Kung. As the title suggests, this post is about the former, as the latter will be blogged about at some later time.

Phad Thai is a casual affair. It is not fancy or special food. Translated, Phad Thai mean Fried Thai style noodles. This is an even simpler explanation for an already simple dish. A good Phad Thai (and by this I mean an acceptable one) is made by fry cooking dry noodles in oil, fish sauce, and tamarind juice until they are just softened. An egg is added to the mixture, as is tofu, peanuts and small dried shrimp. Near the end, green onions and sprouts are added to fill out the dish. The dish is also served with extra raw green onions, lime, and the usual chili/sugar/fish sauce. Sometimes more veggies are included like additional bean sprouts and banana flower for bitterness and crunch. 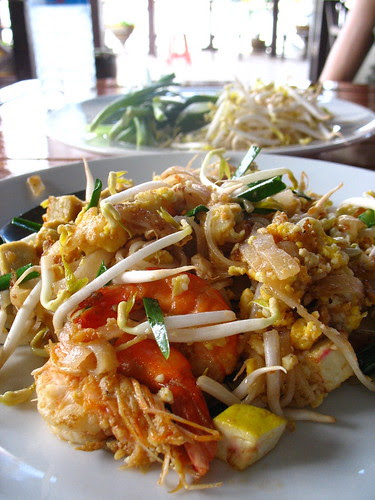 I give a breakdown of the ingredients as the exclusion of any of the above makes this dish bland. You can find Phad Thai being mass produced on Khao San Rd (a popular tourist street) for example, with the exclusion of just about everything but the noodles themselves. This makes it easy to not conflict with anyone's dietary restrictions, but it also greatly restricts the all important quality we so enjoy in Thai food, which is, of course, flavor.

Phad Thai is often at specialty stands and can, on occasion, be bought at a more run of the mill stir fry stand. It is not a dish often bought in a normal restaurant as it is quick and cheap. It makes a good quick meal on the street or it's perfect for takeaway. Most places will throw in some large prawns for 5 baht extra. 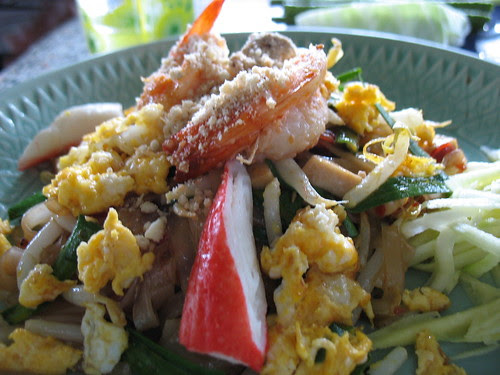 a slightly special version at a restaurant in Ayutthaya
Posted by a at 5:19 PM No comments:

At the morning market there is a man who sells the nicest old fashioned snacks. Here we have rice balls, covered with cocnut, and a sweet coconut filling. Ten balls for ten baht.
Posted by a at 8:17 PM No comments: