High Tea at The Oriental

Today the population of Bangkok awoke to the news that the Thai Rak Thai, the political party of former prime minister Thaksin Shinawatra had been dissolved, and a further 110 party executives had been banned from politics for five years. Instead of the violent street protests many observers had predicted, there was relative calm. Perhaps this was due to the fact that the judgment read by the constitutional court lasted a full nine hours and went well past most sensible peoples' bed times the previous night. Conveniently, today also happened to be the public holiday Visakha Bucha Day (Buddha's birthday) so we all had the day off. Seeing that this was an auspicious day, it seemed like the perfect time to waddle on down to the Oriental Hotel for high tea. I would spend this Buddhist holiday acting in a very un-Buddhist like fashion.

The Oriental Hotel is often described as one of the finest hotels in the world. Today's venture was my second time on the premises. It's a strange place full of the upper crust and the pretenders. The wealthy well dressed rub shoulders with the equally wealthy and slovenly. A Louis Vitton store sits directly across from the main entrance. This is certainly a place to see and be seen. For others it's simply a place to see as it has a colorful history. Many famous authors spent time at the Oriental Hotel over the years. The oriental proudly lists these great men for their guests to see. High tea is served in the Authors lounge where a dress code is strictly enforced. No sandals, no backpacks, no undesirables.

Here's the Author's Lounge where even people with little or no writing ability can can enjoy high tea. 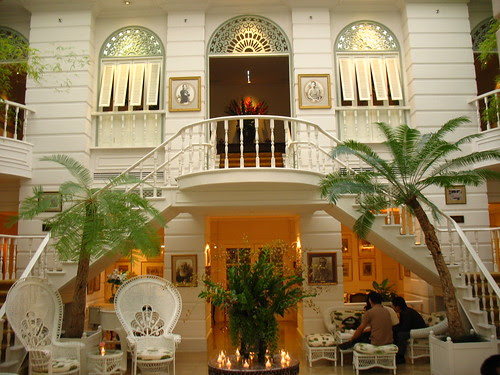 Here's a nice display of what kind of teas are available. 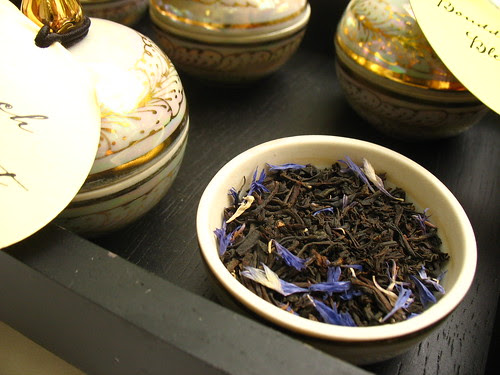 On to the food. Our party opted for four! Traditional Tea sets. This included the usual suspects: scones, a selection of jams, clotted cream, finger sandwiches, cookies, cakes, and of course tea.
We started with a nice lime sorbet. 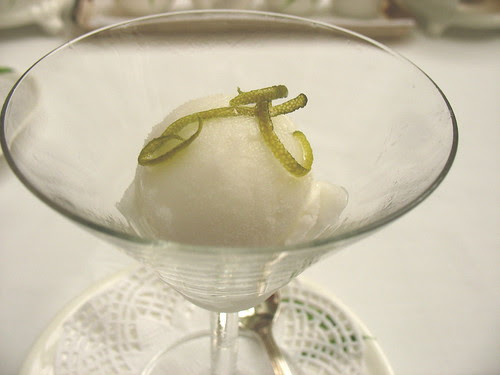 Next came everything else!
Scones: 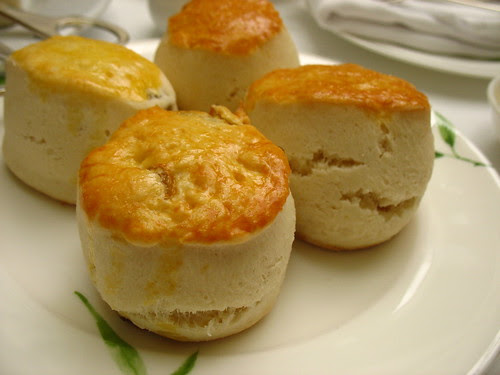 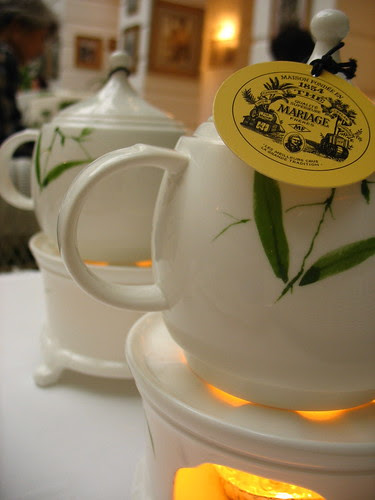 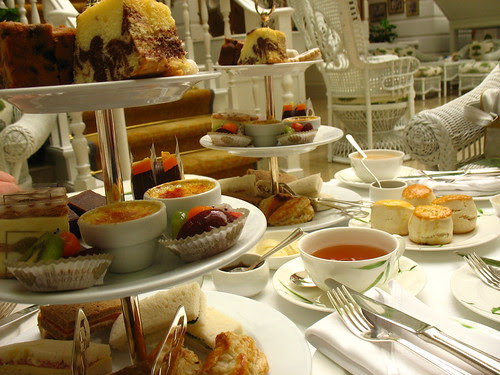 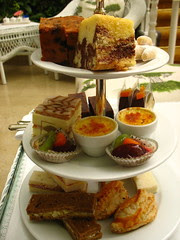 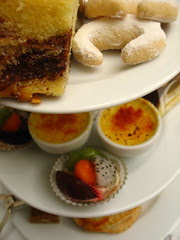 This was all a little too much and rather expensive by Thailand standards. A whopping 900 Baht gave us each the privilege of drinking tea like good old-fashioned colonialists in a country that never suffered the indignity of being colonized by a foreign power. We skipped dinner.
Posted by a at 6:00 AM No comments:

Sunday morning.
Stumbled out of bed, went downstairs to the morning market for a bag of lychees and this lovely sticky rice. 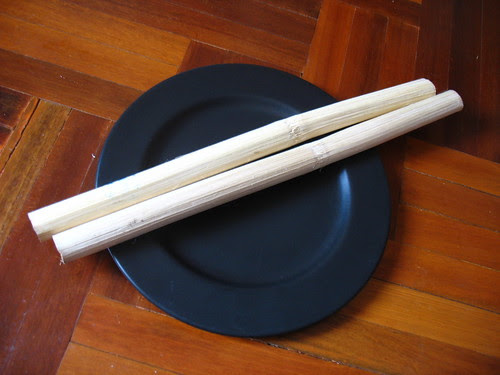 I'm tempted to say that this is bamboo, but it breaks a little too easy to give up the sticky rice.

The rice is shoved to the end of the section and the top is stuffed with something else to protect the rice. Crack open and enjoy.
Posted by a at 7:01 AM No comments: 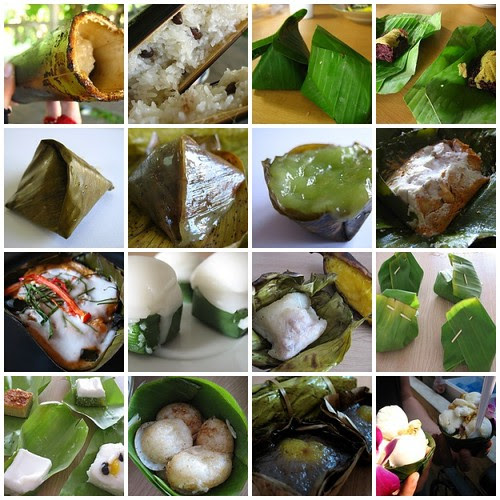 What does your food come in? A bag, a box. How about a leaf?
It seems like eveyone is talking about what they can do to be a little better to the earth. Ex: reusing plastic bags. I like to think that we can learn a little something from Thai snacks. Many of the old style snacks come wrapped in banana leaves, palm leaves, and other unfamiliar broad leaves. Thailand is certainly not the only place I've seen this. All through Latin America people eat a variation of tamales, wrapped in banana leaves and corn husks, both by products of food crops. Something to think about.
Posted by a at 7:29 AM No comments: 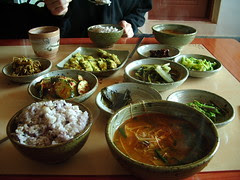 country food
Two years ago today I ate what I called the best breakfast ever. I'll stand behind that comment. It was eaten at a small Minbak in the mountains while spending the weekend hiking Gajisan in South Korea.

It was: Mixed rice, spicy chicken soup of come kind, some kind of stemmed greens, preserved sesame leaves, cucumbers in a spicy sauce, omelette with greens, cabbage like vegetable, korean zucchini, and maybe a dried fish dish.
Posted by a at 6:43 AM No comments:

From the South pt5. Durian.

I've been meaning to do this post for some time but didn't have the shots. Lucky for me, there were many durian stands along the road along the Andaman Sea. 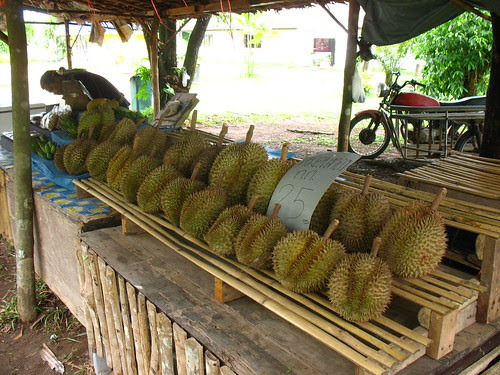 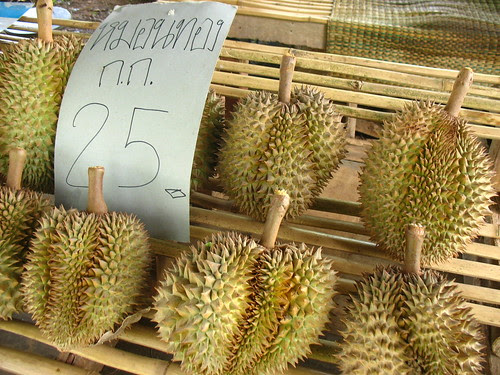 25 baht a kilo. Not too bad I guess. I'm currently paying 30 Baht a kilo in my neighborhood in Bangkok.

Where do I begin with durian? Loved by many, reviled by many. I happen to think it's one of the best things I've ever tasted. It's rich, complex, but almost indescribable. To me it tastes custard like, almondy. It's complex the same way chocolate, coffee, and wine are. It even has a strange intoxicating effect upon me. Others think it tastes like onions, dirty socks, or simply refuse to eat it because of a very rotten smell. But for me, the smell is second only to the taste.

I usually don't have a lot of tolerance for food squeemishness for this simple reason: it is food to someone, it can be food to you as well. Affluence affords us the luxury to pick and choose what foods taste yummy and good, and aviod the "strange" foods. I do the opposite: I relish the privaledge to try everyting.

As I said above, I usually don't tolerate food squeemishness. Durian is a special case though. According to my friend Wikipedia, three different scientific studies were done on durian with each finding a "...different mix of volatile compounds, including esters, ketones and many different organosulfur compounds..." Lucky for me, these things don' have much effect upon me and I can and will eat durian until I make myself sick. 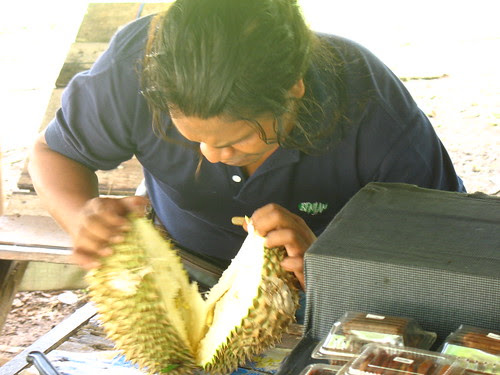 This guy really didn't want to cut open this durian for me. I can't say I blame him. 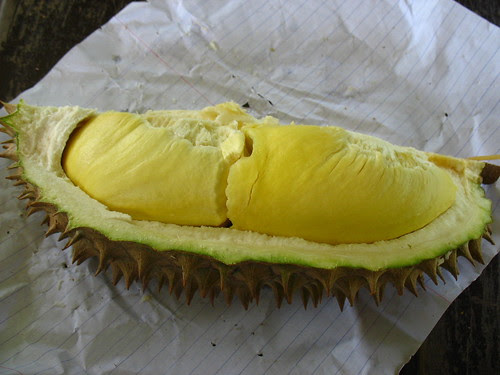 Against my better judgement I ate more than half of a two kilo durian after having eaten a large lunch of curry and rice, fried dough balls of some sort, and a large sugary thai tea. A couple hours later I was still regretting it while peddaling my bicycle through the heat. They say that it is dangerous to mix durian and alcohol. I don't know why, but I don't think I want to find out.
Posted by a at 2:18 AM 3 comments:

From the South pt4

Curry on the roadside. 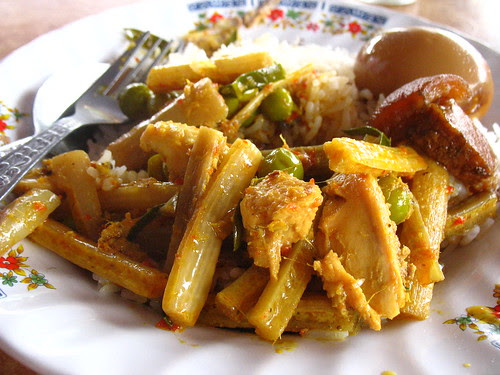 A very respectable curry. What I really loved about this meal was what came with it. 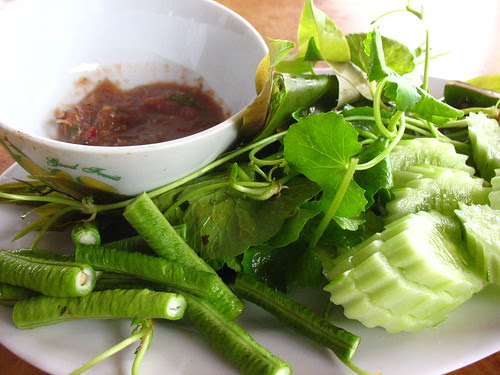 A plate of veggies and some nam phrik. A lovely addition to a rich curry. I've eaten nam phrik with veggies in the north and in bangkok, but never thrown in with my ordered meal. Kind of reminded me of what I liked most about vietnamese food: the huge bowls of greens.
Posted by a at 2:08 AM No comments:

From the South pt3

Maybe outside Takua Pa. A sticky rice in bamboo stand. 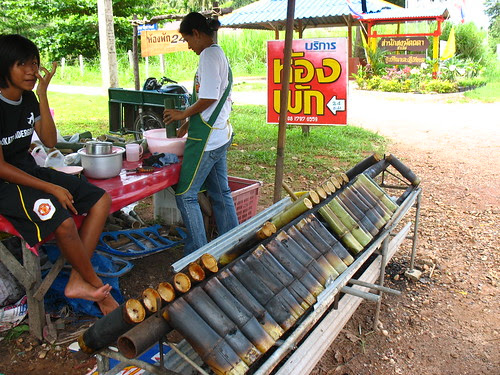 From the South pt2.

Another day, another snack. Somewhere outside of Khao Lak. 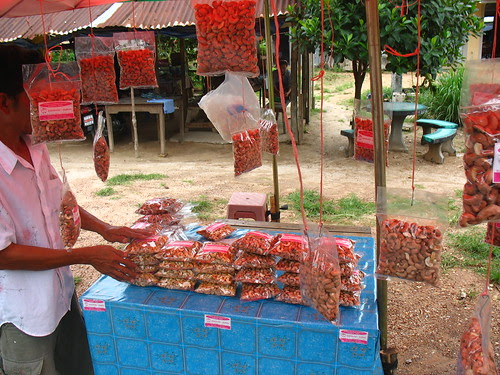 I like to support these kinds of vendors. I hope that these are his cashews from his land. Selling them on the side of the road gets a much higher price than selling all of them off in bulk. They were fresh and tasty as well.

I foolishly forgot to ever take a photo of the growing cashew with its bellshaped false fruit with the cashew "nut" underneath. I would later decide to harvest one of these myself. Unfortunately for me, the casings contain a caustic phenolic resin, urushiol, which is a skin irritant. This same stuff is found in poison ivy as well. My hands are still peeling.
Posted by a at 1:52 AM No comments:

On the road. By bicycle. Scenery and snacks. 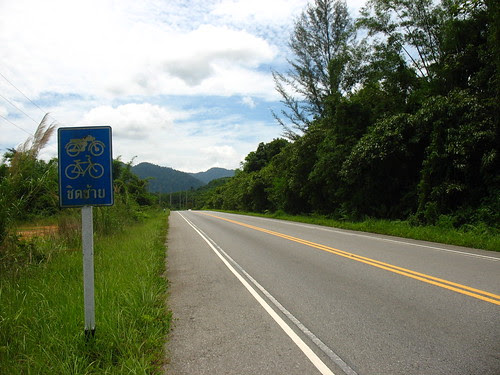 Some snacks were simple and in their natural form. Here's some unripe rambutan: 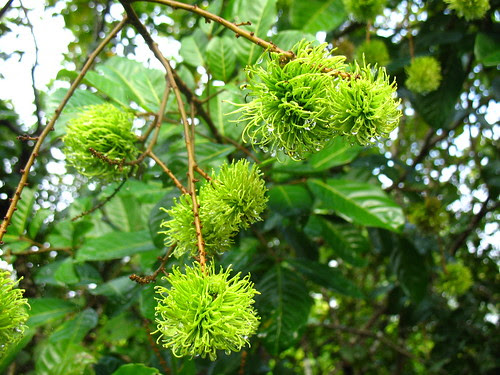 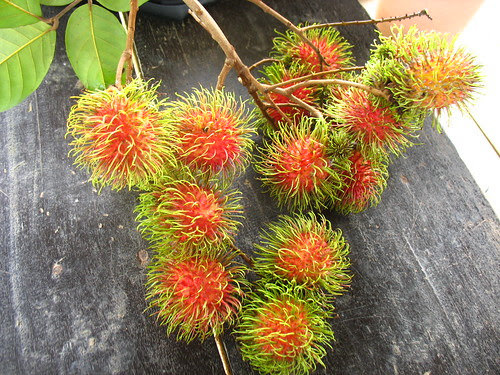 and ripe. A gift from the owner of our bungalow just outside Khao Sok National Park, Suratthamni Province. This here was rambutan, mangosteen, cashew, and durian country. Happy times!
Posted by a at 1:38 AM No comments: