A Day of Eating in Chiang Mai

This here is the first of several posts I'm going to do about a just completed bicycle trip in Northern Thailand. As I didn't have any contacts up there and was travelling by bicycle, I was limited by the limited information I had, the distances I could travel, and the information I could get from people, blogs and publications along the way. I tried to follow my nose. Here are some of the results:

Immediately after arriving at our guesthouse in Chiang Mai, I informed the owner that I wanted to eat, and before I could describe for him my food interests, he told me that I had to eat at Khao Soi Lam Duan for their famous Khao Soi. So we did.

The Khao Soi was a rich and satisfying. 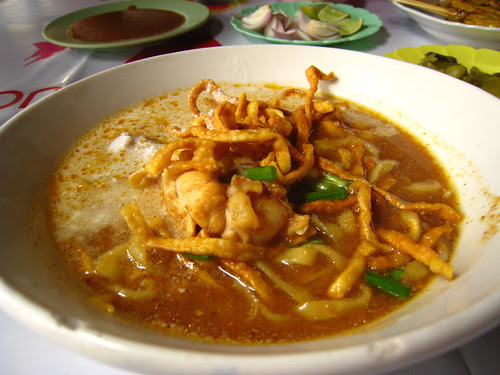 The clever waiter could see our near delirious state and convinced us to order more food. We ended up with a plate of Satay that was responsible for putting us over the edge. We waddled out bursting at the seams.

The day was young so after we recovered from brunch we decided to cycle to Huay Teung Thao Reservoir. It's an excellent place to pass an afternoon with friends, food, and maybe a few drinks. Their culinary offerings are of a standard variety except for one little peculiarity. Kung Ten: Live freshwater shrimp. 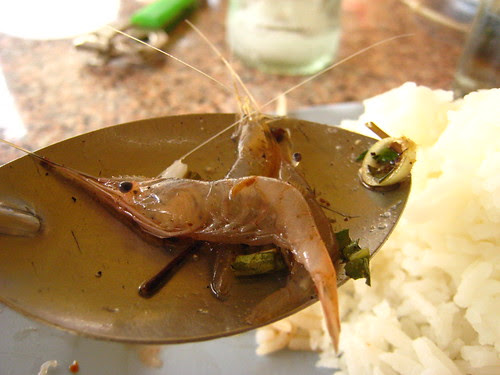 Before you think that there is something off putting about all of this, just think of it as sushi, but a little earlier along the preparation process. Or: it certainly isn't rotten or unfresh. It's alive for god sakes! Do be careful, as they will bite your tongue! Whatever your take on this, mine is that they are delicious. This little delicacy is seasoned with lime, lemongrass, shallots, and chili. If this little description isn't enough for you, here's a little video of the affair. A first for this here blog. enjoy!


After returning from a relaxing afternoon at the reservoir it was getting on near dinner time and we had a problem: where to eat. As I had mentioned above, we lacked a good source of information about where to eat. I checked the always informative Realthai and Eatingasia, and the latter provided us with a good suggestion, but when your only transportation is a bicycle, searching the distant, dark sois, and quiet roads after dark seems like less than a brilliant idea. Instead we played it safe and ventured into the moat to the often recommended Heuan Phen, a restaurant serving northern Thai food to nary a thai person. 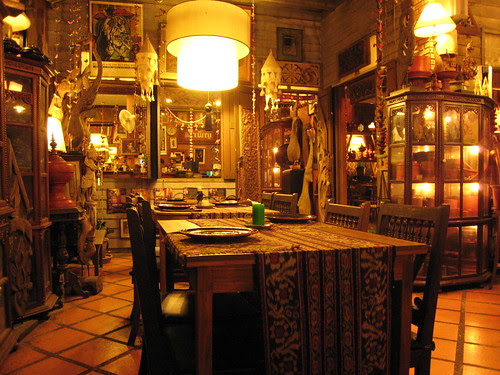 It's a really an attractive place serving northern specialties at very very reasonable prices. But how's the food? I read in a local publication that they serve two versions of their food: the mild version for the tourists, and the real version for Thai people. I'm sure they had leftovers of the latter on this night. We certainly had the former.

This here crab naam phrik was tasty, but rather bland. This is unfortunate because I could tell that the food itself was made with fresh and good ingredients. It simply lacked the intense flavor I was hoping for. We also ordered some other dishes that suffered a similar fate.
Posted by a at 4:30 AM

About Huen Phen ... the thing to do is go for lunch. Service is in the simple, open-air front of the restaurant (as opposed to the antiqued-up back) and the place is packed out with Thais. We did a photo shoot in the back of the restaurant at lunchtime, with food from the front (if that makes sense). Of course we ate everything after the shoot; it was heads and tails above what's served at dinner which is, I'm afraid, a bit farang-ified.

I'm from ChiangMai. Did you have a good time up there? You did a good research - Heuan Phen is one of my favorite. However, you may be right, they might serve you a farang version. You know, there are many picky eaters out there.

I agree, lunchtime is much better. You can see & pick what you want.

Wow. Jumping shrimp. You just crunched it up, shell and all?

Robyn
Thanks for the info about lunch. If I'm ever up north again I'll give it another try at lunch time.

Puck
I did have a nice time. You are right about all the picky eaters. It really is a shame that the cuisine suffers for other people's pickiness. It also grates me that because of this, it makes it difficult for me to get the meal i want because it is assumed that all "Farang" do not like spicy food. I think food should always be served how it was intended. If it is wanted in a milder form (watered down?), that is up to the diner to decide.

Kaela
You crunch it up, shell and all. It is rather small. It's the only option really.

The dancing Shrimp are actually bland apart from being covered in chili.
I love the look on my farang friends the first time the see their meal jumping around on the table