After a rich lunch of curry and fried tofu, I was presented with a slice of seafood pizza by a co-worker. My stomach was full and the snack prospects were bleak. I did what any sensible person would do. I bought a bag of boiled peanuts. Next door to a seven-eleven this woman hides out in a store front and emerges to sell a very generous bag of boiled peanuts. These aren't the kind of peanuts you eat at the old ball game. I've had unseasoned and seemingly underboiled peanuts before in South Korea. These are much better. It is said that boiled peanuts are eaten in the American south, but I've spent little time there, so have no experience. 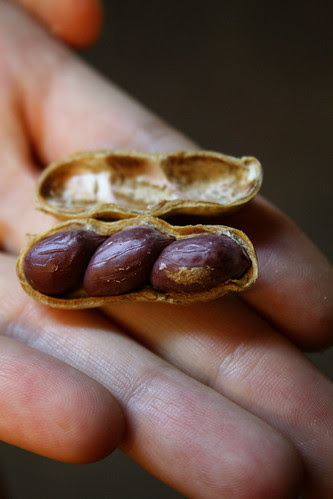 Did you know that boiled peanuts are the official state snack of the State of South Carolina? Neither did I. For your reading pleasure, here's the law:

SECTION 1. The General Assembly finds that boiled peanuts are a delicious and popular snack food that are found both in stores and roadside stands across the State, and this unique snack food is defined as peanuts that are immersed in boiling water for at least one hour while still in the shell. The General Assembly further finds that this truly Southern delicacy is worthy of designation as the official state snack food.
Posted by a at 6:21 AM