Okay, it's time for a frank admission: I've been going through painful withdrawals. Food withdrawals. It's not the food itself but the lack of street grubbin' that's got me down. I do not in fact want to spend all of my meals, not eaten at home, being served and tended to. There's nothing finer than a stand, a window, or a blanket with a pile of food being slopped up for the hungry passerby. This much I know. With this truism, I just about had a heart attack when I was taken to the corner of 12th and Hawthorne in Portland, Oregon. 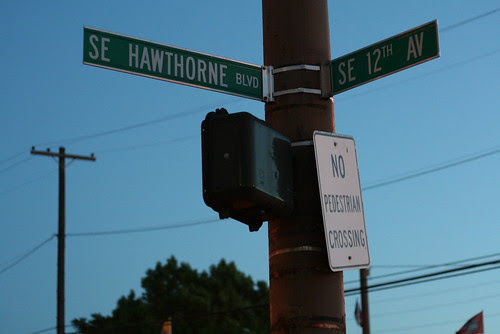 Here's a street corner like many others in America: passed by many cars and unsafe for the lowly pedestrian. Except: In only a little more than a year since my last visit, a healthy group of street stalls have developed. If I was so naive, I might declare that there was in fact a god. Ha.

Amongst the Mexican, falafel, and cigarette! stalls, there exists a Fry Cart owned by a friend of a friend. Who knew? 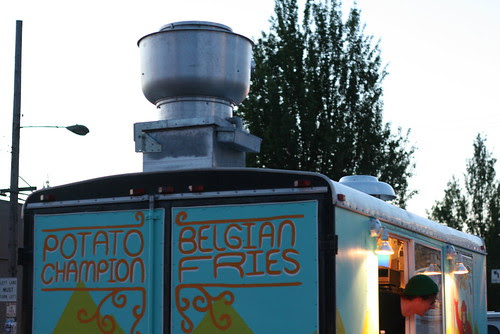 Potato Champion serves up Belgian style fries for the oh so sophisticated Portlanders. Really: I can't remember what the fries tasted like in Belgium, but the beer sure was good. My good friend and sometimes Potato Champion fry cook stand in told me I would love it. He was right of course. 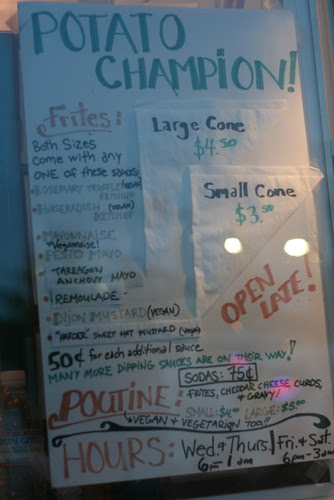 I let B do the ordering as I was too flabbergasted to behold such a sight. 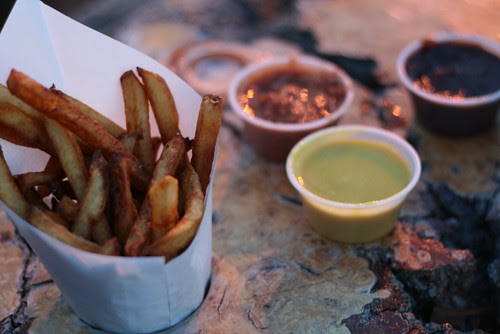 We started with some fries. Delicious. Made more so by all the sauces, which if I'm not mistaken, we got more than the usual serving. I think we had the rosemary truffle ketchup, horseradish ketchup, and Dijon ketchup. Wow. But this wasn't all... 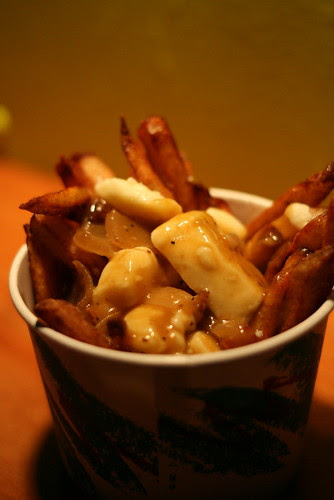 We also had the Poutine: fries, cheddar cheese curds, and gravy. Oh my. Even though I drank a couple of beers before this refueling stop of sorts, I assure you it would be good before beer as well.

As America begins its unpleasant yet not unexpected decline, at least we can hope for a revival and possibly a new golden age of street food as costs raise, real wages stagnate, and people turn to the streets for some sweet relief. Or maybe: Portland, Oregon is an anomaly where many people can and will eat better than you or I in our larger and more diverse cities.
Posted by a at 5:43 PM 2 comments: 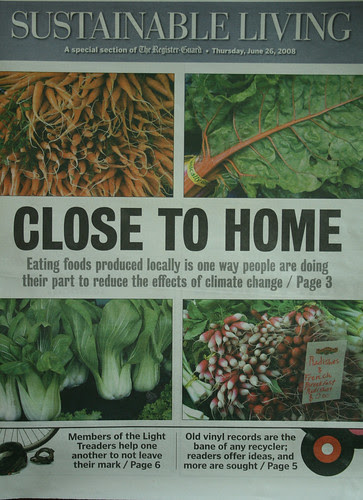 The other day, flipping through the Eugene, Oregon based newspaper, The Register Guard , I came across something that made me pause. The insert about "Sustainable" Living" looked a little familiar. What do you think?

I guess this kind of stuff happens all the time. With the low price of digital photography and the increasing number of bloggers, redundancies are bound to occur.
Posted by a at 1:58 PM 2 comments:

It's time to stutter and stammer my way through describing to you my favorite pizza in Portland, Oregon. You see, this is the "best" pizza I have ever eaten on a couple occasions, but am not sure I have the authority to make such declarations. Oh wait, I don't have to! How about we just let them do the talking? Go here and read about the pies. Everything you need to know is explained there. Come right back for a closer look!

When you go to Apizza Scholls you wait. This is a given. Apizza Scholls showed up on Anthony Bourdain's television show about a year and a half ago and has received accolades locally and nationally. Then of course, the Portland dining scene as a whole is in a bit of a golden age at present. People are dying to spend money on good food. The waiting area was full of well dressed middle class Portlanders drinking bottles of wine and talking about their mundane work days. We settled on tall cans of Heilman's Old Style. 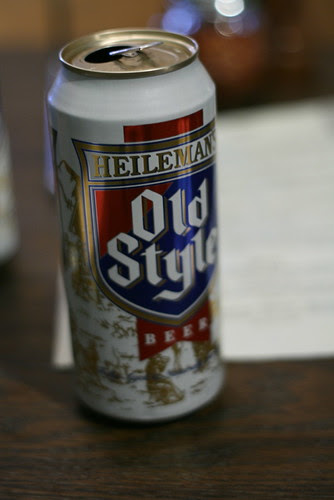 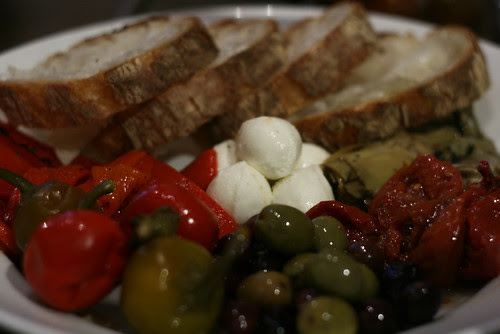 We snacked on a very competent appetizer, but who really gives a damn about that? We came for the pizza.

How do you like your pizza? I like it very simple. I don't have a problem with toppings, but I like the flavor of the pizza itself to provide the enjoyment, not the afterthought. I believe Apizza Scholl's website once included rules about how many toppings they would allow on their pizzas. It appears to be gone now. 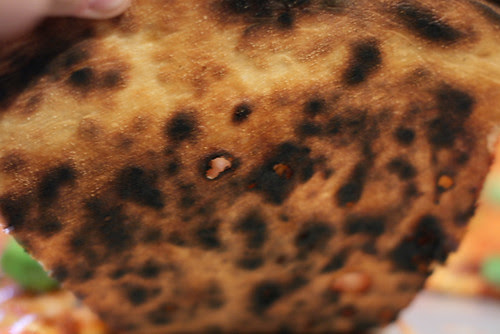 If you'd done your homework, you'd understand my reasons for showing you this picture. This crust is perfect. It almost reminds me of excellent bread. In fact, while eating my crust, I remarked that each piece was good to the last bite. I dare say the crust is my favorite part. 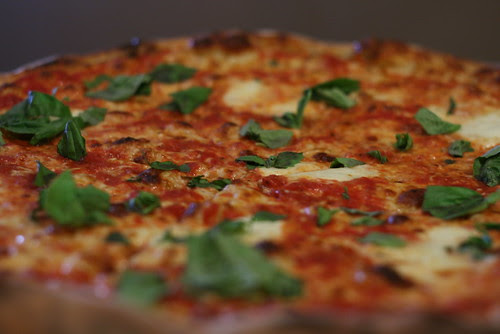 Looks simple huh? It may look that way, but this pizza reaches a level of perfection not easy to attain. It's not just the ingredients, the oven, the quality control, or the people doing all these things. It's all of the above. It's really satisfying and a great way to eat when someone puts this kind of care into your food. As a friend commented at an unrelated meal on a different day: "Man, after I eat great food, it's always tough to go back to eating junk." I feel the same way about pizza. 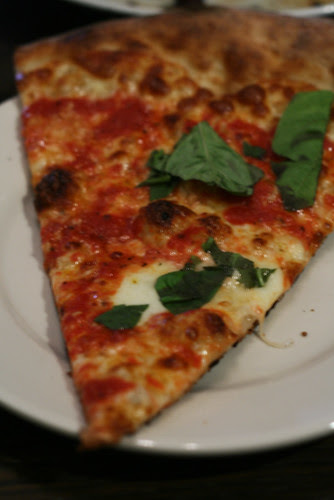 One thing I've been wanting to do since I returned to America was indulge in some very American food. This is by no means the only indulgence, but a very fitting one. 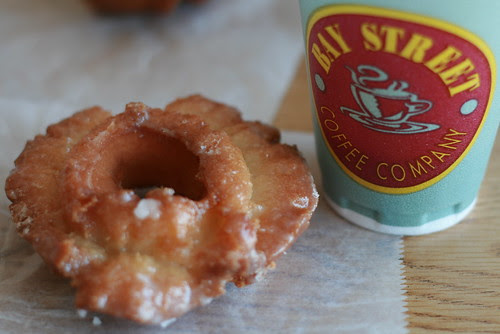 An espresso and great old fashioned donut at the very unpretentious, yet very comfortable Chuck's Donuts in Redwood City, California hit the spot. An old fashioned, old fashioned glazed donut, and two double espressos came to a total of $4.90. The Khmer owned Chuck's donuts had been in business since 1974 and the place has the feel that not a lot has changed in some time.

Donuts will kill you, but so will a lot of things. Diet beverages and low fat items are not necessarily your gateway to health. Hell, some of them might even kill you faster. Moderation, and walking once in a while might be a key to your success. Get off the couch, leave your car at home, and while you're at it, eat some donuts. 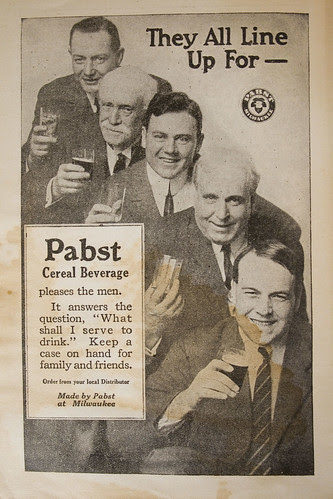 While flipping through my great grandmother's old cookbook, I spotted a few things of interest. This above Pabst advertisement caught my eye.

And who isn't interested in a chapter all about Invalid Cookery? 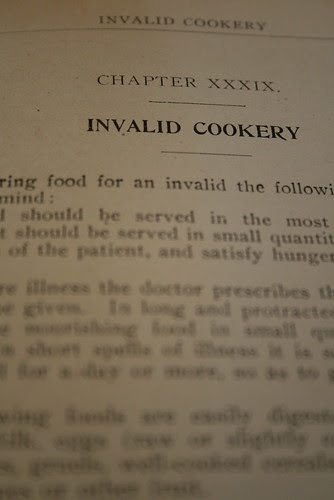 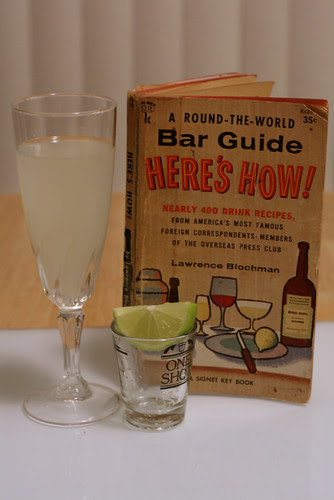 Recently, while spending time with relatives in southern California I leaned that I had a distant relative named Lawrence Blochman, who back in the fifties, wrote a book about cocktails. It's called A Round the World Bar Guide Here's How! It contains "Nearly 400 drink recipes, from America's most famous foreign correspondents members of the overseas press club." I don't know very much about Mr. Blochman. I'm not sure if he was a drunk, a womanizer, or something unpleasant like that. But he was certainly witty and well informed, and for that he has my admiration. 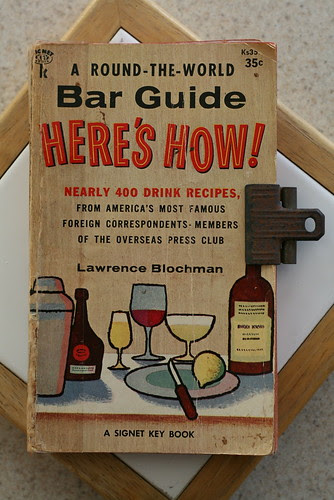 I picked up the old book and it fell apart in my hands. I spied the recipe for a daiquiri. Here's what Mr Blochman had to say:

"... the best rum drinks are all variants of the standard US Navy tipple, a favorite in officers' clubs from Guantanamo to Panama: rum gomme, and lime. Even the queen of rum drinks, the Daiquiri, one of the basic cocktails, is built to this pattern:

Shake with plenty of cracked ice until you are out of breath and your eyes begin to glaze. Then strain into chilled cocktail glass.

The daiquiri (call it Dackeree if you want, but the correct pronunciation is Dye-kee-ree) is credited to some American engineers who, after the Spanish-American War, were stationed at a place in Cuba called- you guessed it- Daiquiri. And since Daiquiri was midway between Guantanamo Bay and Santiago, where the Bacardi people were conjuring up their precious elixir, the original Daiquiri was made with Bacardi rum..." 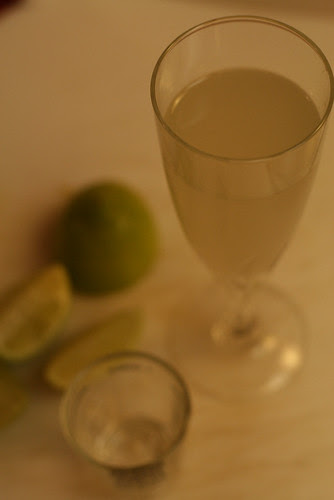 A long wait at the Krabi bus station filled our party with dread. Luckily there was a nice market nearby selling a wide variety of southern style curries! I had a good long conversation with the proprietors about what each pot contained, and after much hand wringing, I settled on a spicy fish curry. My crazy companions chose Kanom jeen. Fools. 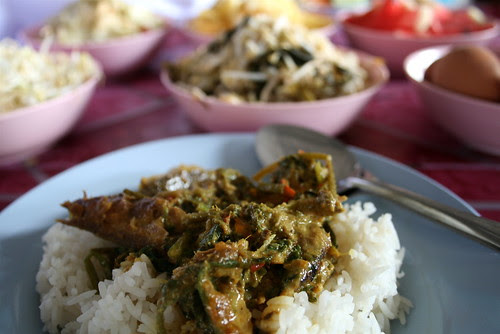 Man oh man... It's not just the complex and spicy flavors that I love, it's the variety of condiments that make this a blissful meal. 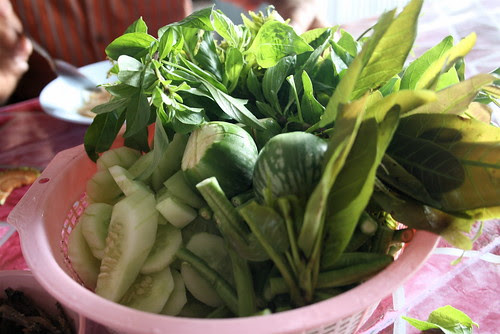 One thing of interest was this mystery item: 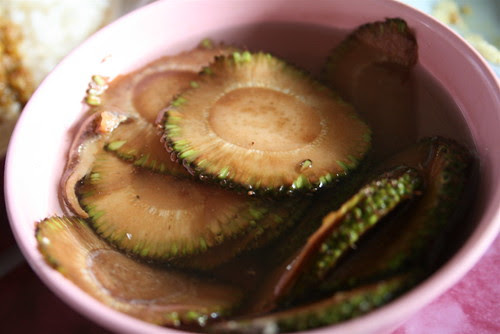 Fruit? Vegetable? Jack fruit? Anyone know? It filled my mouth with a most unpleasant sensation.

This curry stand was so good I had to sample more. I went for the recommended duck curry. 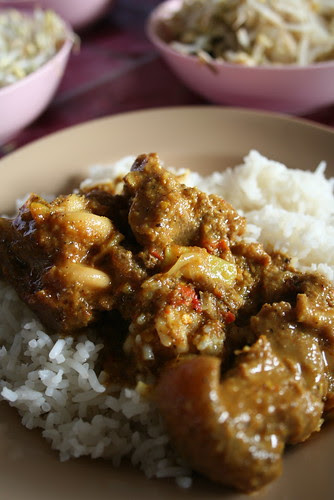 It was rich, fatty, and spicy. Enough to put even the hungriest of eater over the edge.

Times like these perfectly capture what I love about eating in Thailand and what difficulties arise when blogging about it. Literally everywhere you can find delicious food. It is in random and or unremarkable places like this that the idea of trying to document the best becomes totally ridiculous. Even though for our party this was an ideal meal, I wouldn't dream of recommending that anyone go out of their way to hit up the market near the Krabi bus station for a bowl of curry.
Posted by a at 12:47 PM 4 comments: