Mentioned before on these pages is the ease of which I can and you could also make delicious homemade tortillas. If you are very dexterous or a middle aged Mexican women, you could simply hand form them. If you're at all like me, you'd want a tool for the job. My beloved press deserves its own post so here it is: 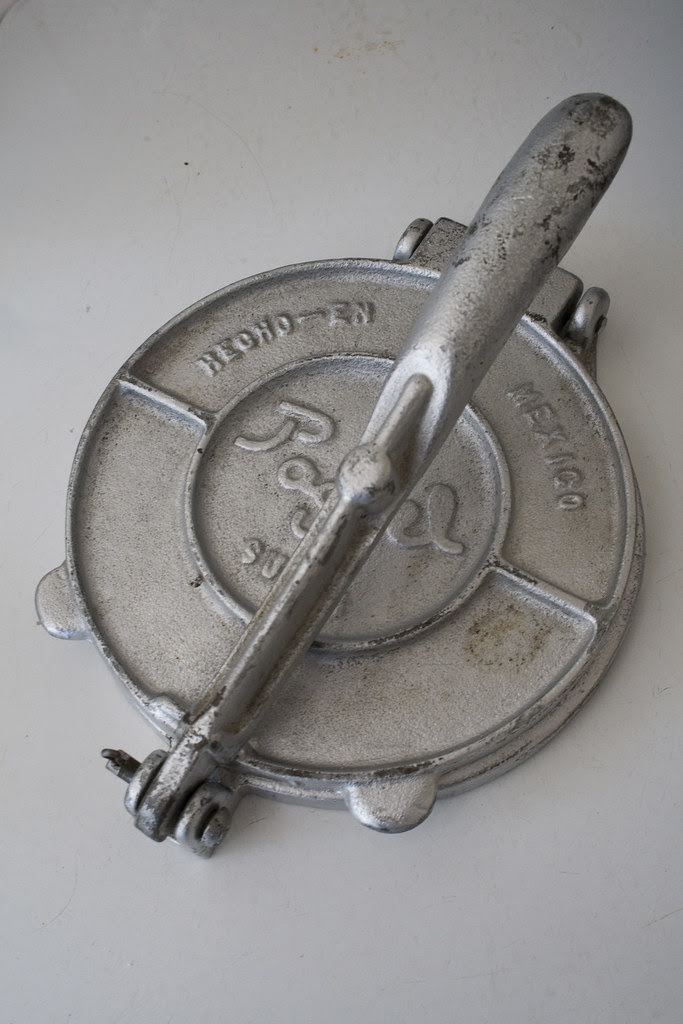 I can't say enough good things about this press. It's a couple(?) decades old at least. My mother gave it to me after years of neglect in a cupboard. My aunt owns the exact same press, likely bought at the same time as this one. 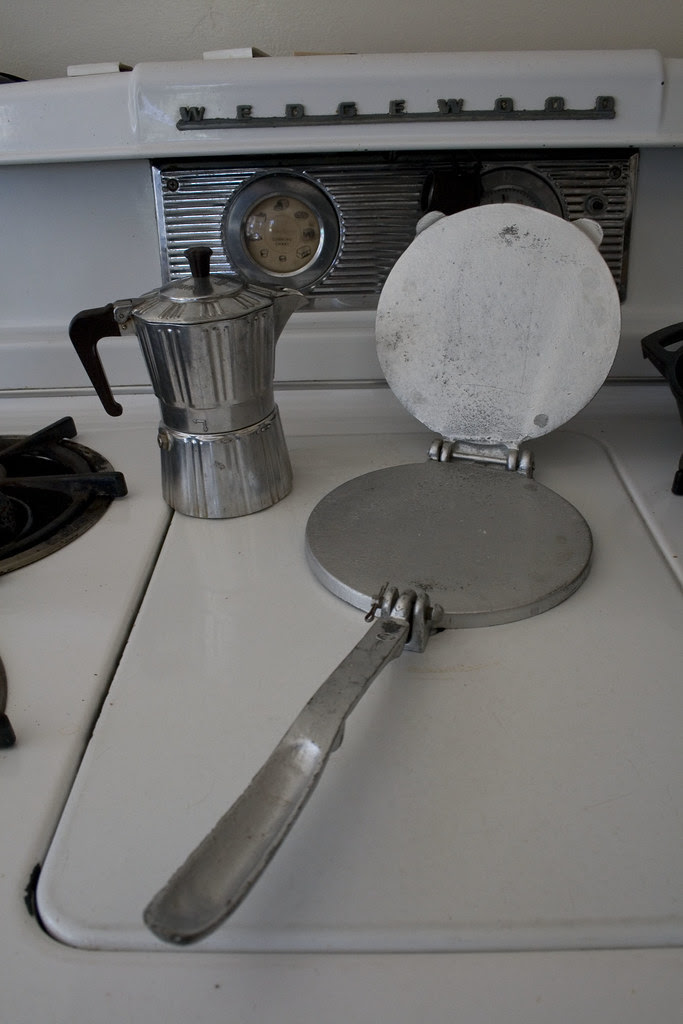 Mind the coffee maker. Really, it's only as valuable as it is useful. To make tortillas you need masa, and that it one thing I'm not making from scratch. Making hominy, drying it, and then grinding it is out of the question. Luckily, in just about grocery store in the state of California you can buy a large bag for a few bucks, meaning you have fresh tortillas for next to nothing. A press can be ordered online or found in the local tiendas. What are you waiting for? A word of caution: much like roasting your own coffee, growing your own tomatoes, or cooking your own methamphetamines, once you get a taste, there is no going back. 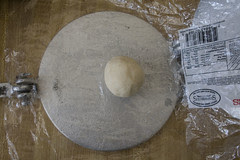 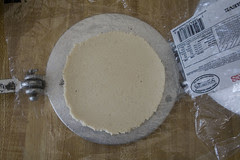 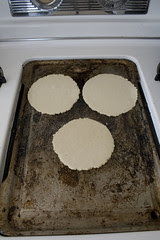 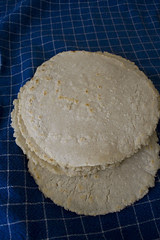 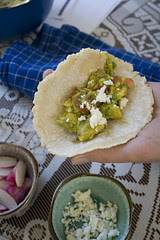 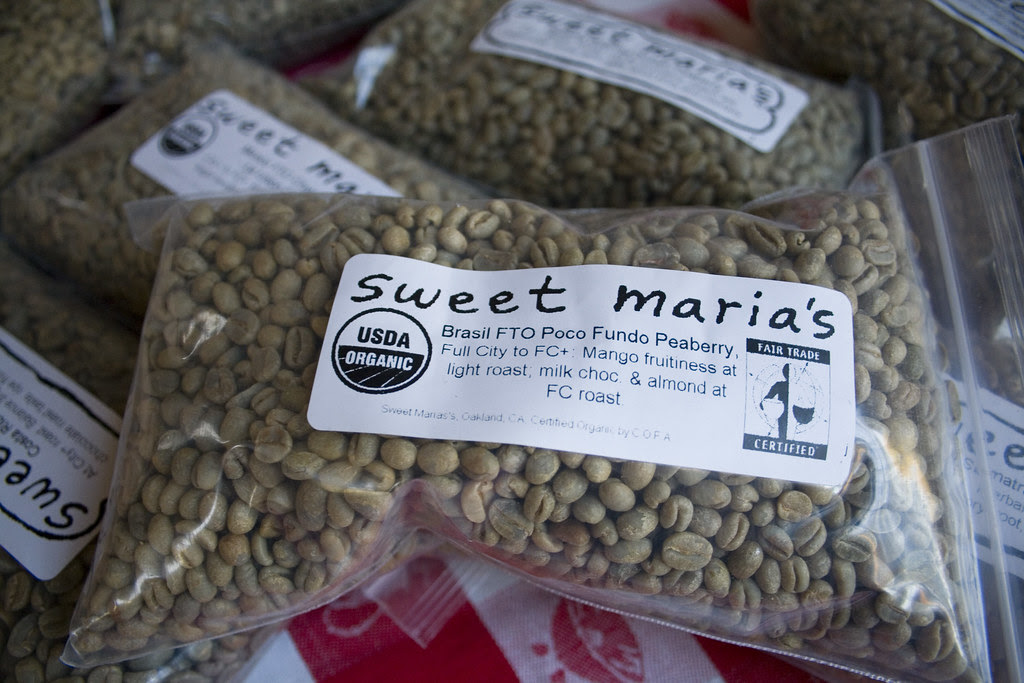 Do you want to roast your own coffee? Meet Sweet Maria's. It's simply the finest source of green coffee beans I have found online or elsewhere. Do you live in the Bay Area? Even better. You can pick up all your coffee and accessories at their shop in West Oakland. I recently picked up a sampler pack of eight one pound bags of coffee. Only one pound has yet been roasted, but it was simply excellent. The price is right, the quality is excellent, and it's fun. A warning: once you start, you can never go back. Have a look at the Sweet Maria's web page. There's a mountain of great information there. Consider it your homework.
Posted by a at 9:59 PM 5 comments:

It looks like I almost forgot to mention the recent excellent work of fellow bloggers. Perhaps anyone who reads this blog also reads eatingasia, but it still seems like a good idea to look hither and see how well they ate while in Oakland. Sheesh, those photos really put mine to shame. Enjoy!
Posted by a at 8:20 PM No comments:

West Oakland: 53 Liquor Stores, no grocery stores. The sight of a taco truck gave me pause. 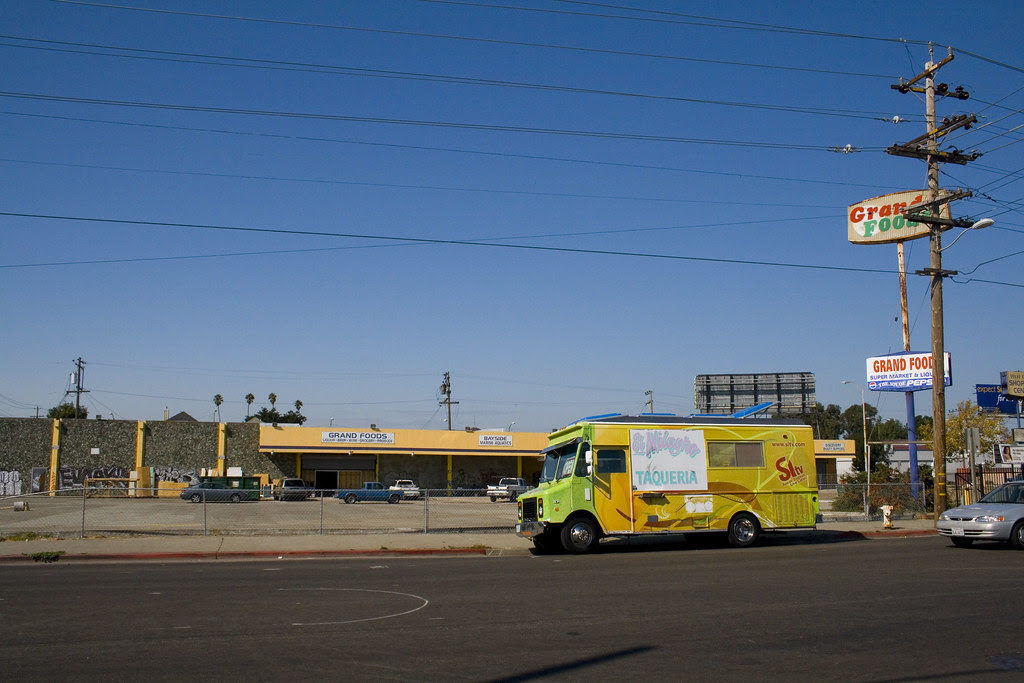 El Milagro is situated in front of the empty Grand Food building. You can no longer buy groceries here, but tacos are available. Not a suitable replacement, as much as it pains me to admit.

My order? A very large veggie burrito. The menu had the usual suspects of tacos, tortas, and even ceviche tostadas. Maybe next time. Today I was more interested in the landscape than the food.

A few things you should know about West Oakland can be learned here.

If you're still hungry, give El Milagro a try.

Earlier this year I wrote about an atrocious "American Breakfast" consumed in Sangkhlaburi, Thailand. Here's a topic of great interest to me. The approximation of one cuisine on the other side of the world makes for some interesting results. Currently, I more or less cannot eat Thai food in America, much like I couldn't eat most "American" food in the east. This unfortunate situation reduces me to state which I dare not speak of lest you think I was fishing for sympathy. There are always exceptions, but for the most part, my advice to you is to eat what you can where you are, not what you wish you were eating if you were somewhere else. Take this breakfast from the other week. 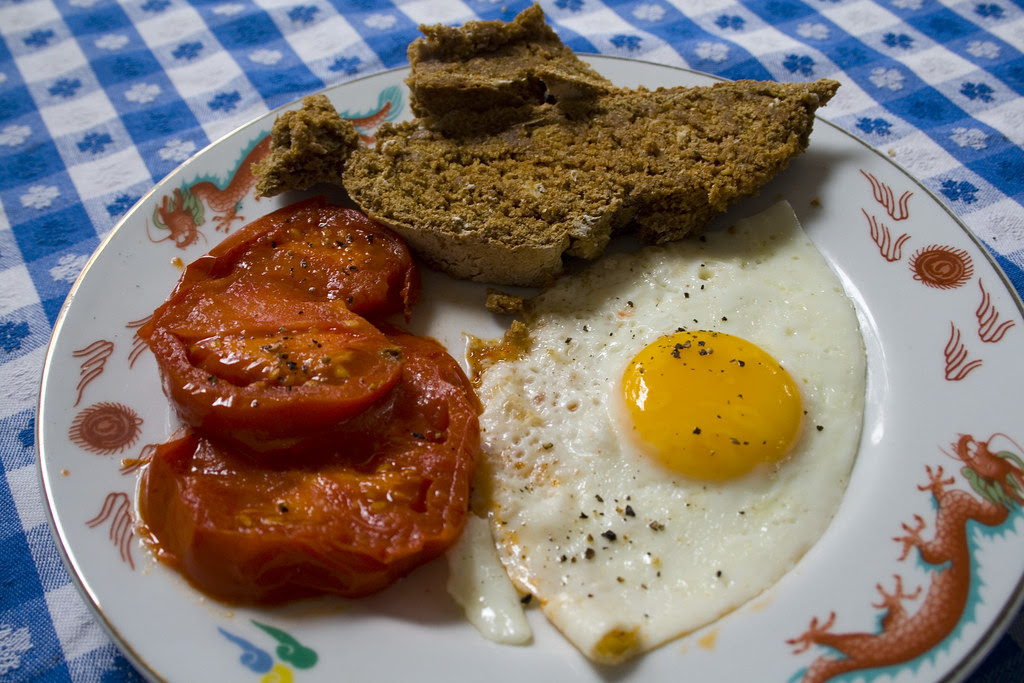 It was perfect. Very fresh eggs. The hen had a good diet. You can tell by the color of the yolk. Fresh homemade soda bread. And most importantly, fresh garden tomatoes (thanks for the plants dad!). As a kid my parents would torture me every year by declaring "There's two things money can't buy. True love and homegrown tomatoes." I don't really know if I believe in the former, but this here photo is a good example of the latter. Anyhoo, at this moment in time, there was nothing else I would have rather been eating and that's the important part. It was a familiar, attainable collection of flavors. Keep this in mind when looking at food from across the globe. It may very well look more exciting than what you ate for your previous and next meal, but this is all the more motivation to get off your butt and put your all into eating what you know and eating it well.
Posted by a at 9:08 PM 5 comments:

After the other day's Asian Food conference, mentioned briefly in the previous post, I was having a mild blogger identity crisis. You see, the whole thing while fun, was this odd professional schmoozing event where I don't really belong. The flavors were a nice treat, but a tad soulless. No disrespect to any of the presenters as it was still a nice event, but it was a lot of name dropping, book signing, and networking. I was left yearning for the street, and the streets of Asia were far away. I did the only thing I could do. On Saturday it was back on the bike, across Oakland, to the taco trucks.

Tacos Alonzo was the first taco truck we ate at in Oakland, and after a couple of visits, it is still our favorite.

Tacos Alonzo sits on a triangular piece of land in the parking lot of a liquor store. Even if you have no friends, remember there is always alcohol. At U and I Liquors you always have a friend. At least until 12:30 AM that is... 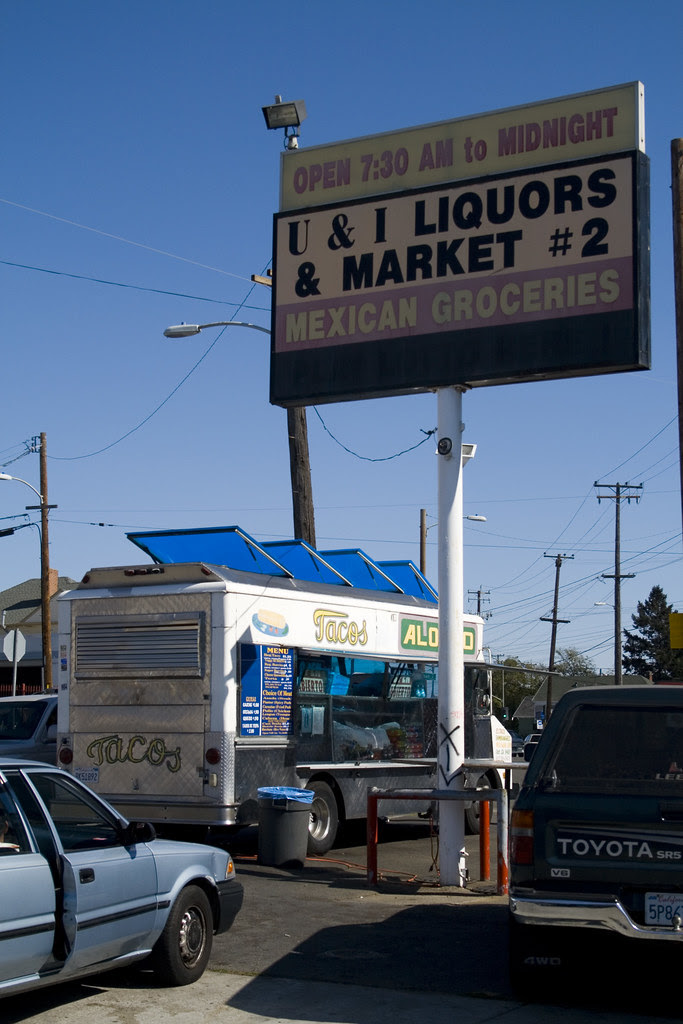 I really like the owner of Tacos Alonzo. A big bear of a man, his deep voice gushes with warmth, and his clear speech whether in English or Spanish is a joy to hear. It's also apparent that behind the grill, he is a very competent man indeed. 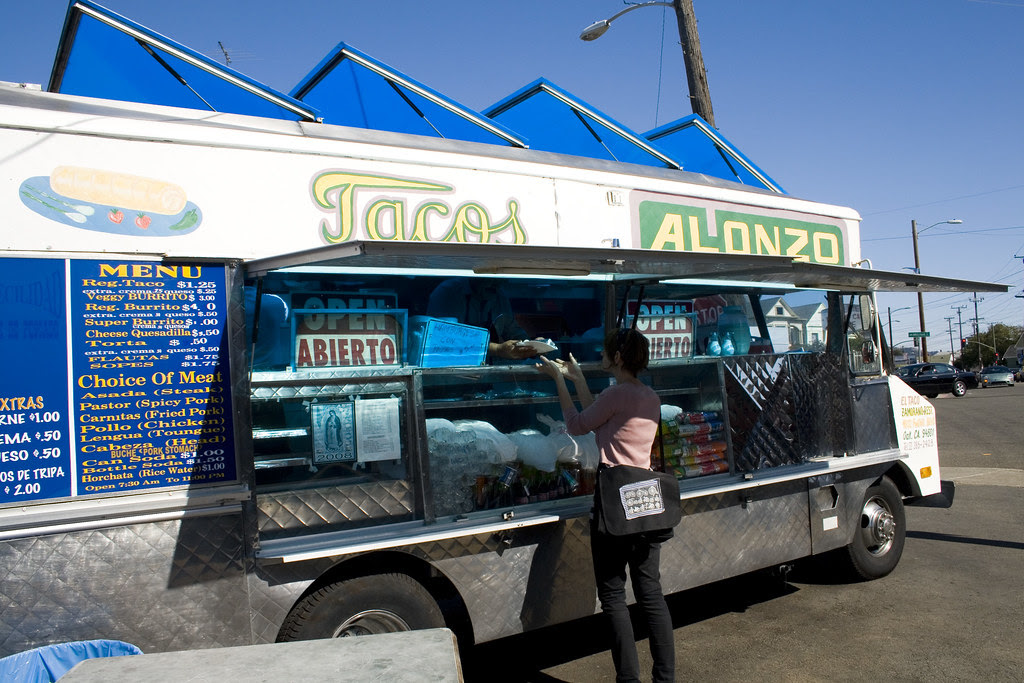 E ordered a veggie burrito. A very good choice I might add. This is probably my favorite burrito around. 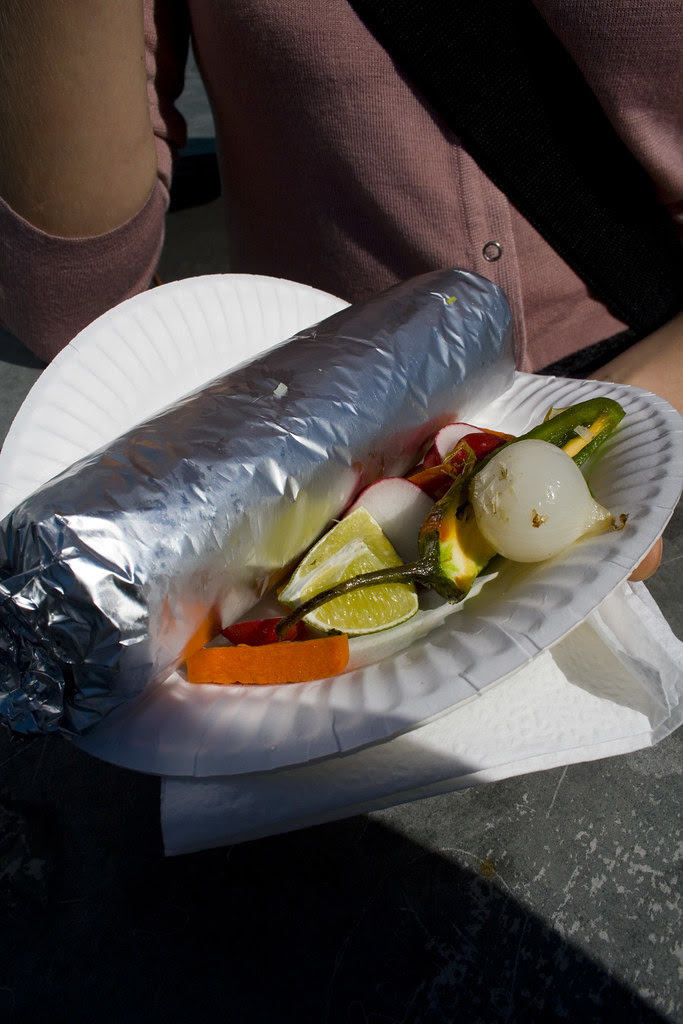 A very nice touch is the pickled vegetables and the grilled onion and pepper. Reason enough for a visit. 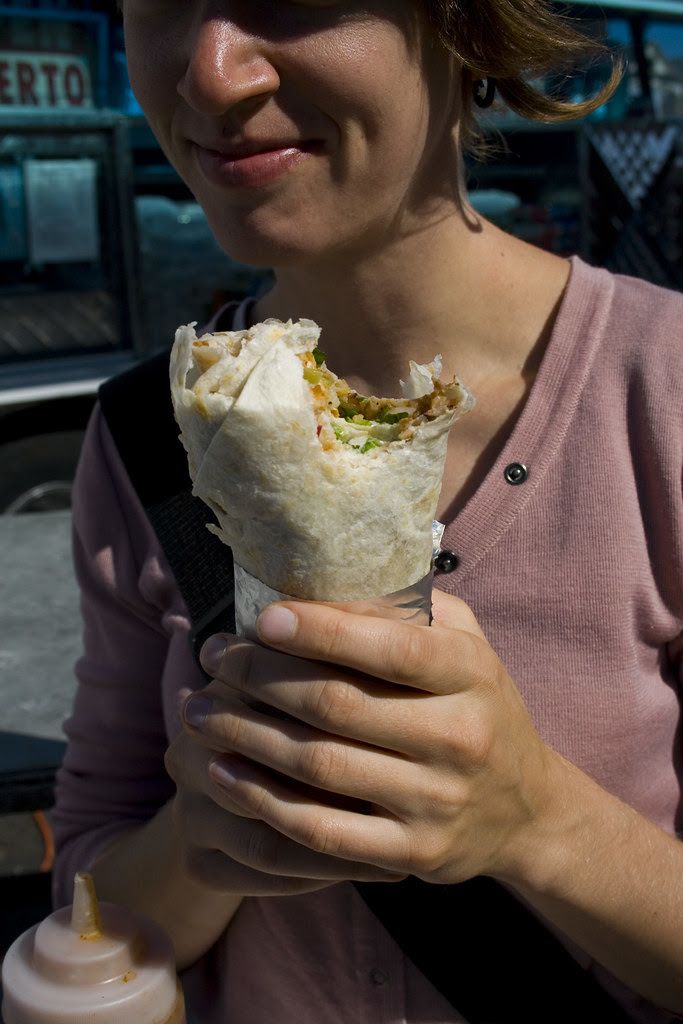 You'd be happy too. 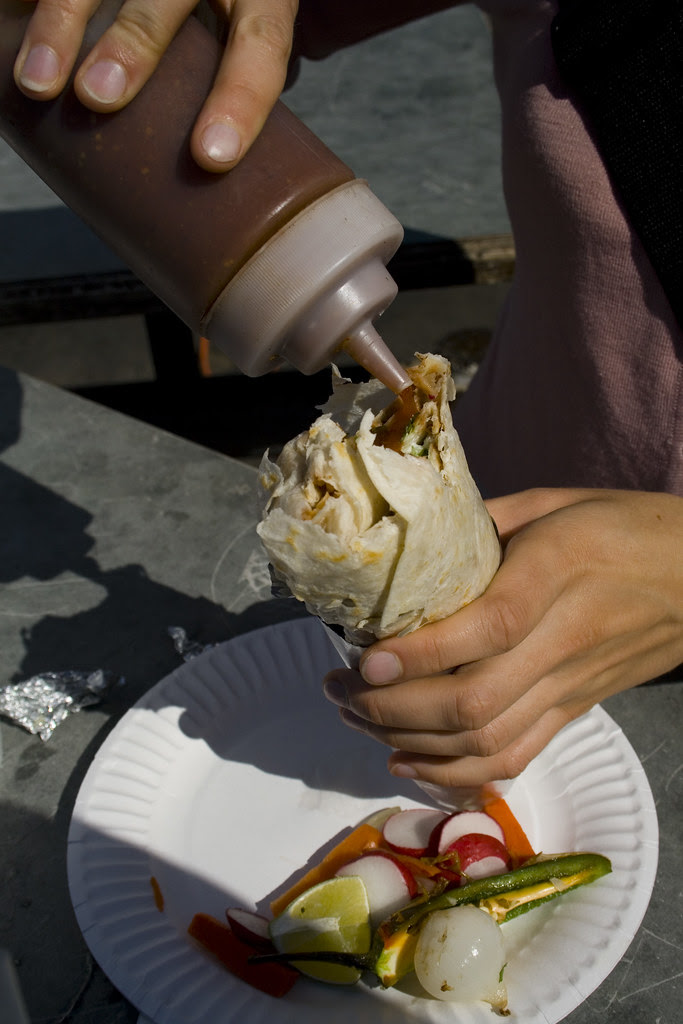 I was in the mood for tacos, and it just so happened that Tacos Alonzo seems to specialize in Tripa or tripe, so I ordered three tacos de tripa. 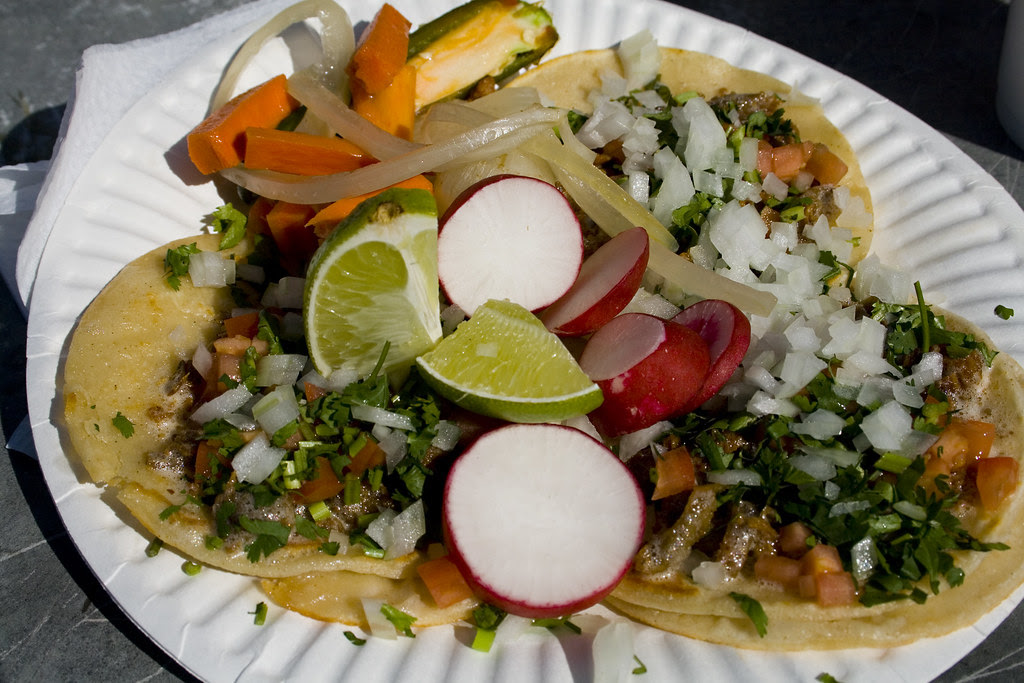 Beautiful, just beautiful. The tripa was rich and just a little crispy. It was a great compliment to the delicious tortillas. I make fresh tortillas at least once a week, but I don't usually have fresh tripa to put on top. Nothing finer on a tortilla than a little greasy, salty meat. Pickled vegetables, roasted pepper, and onion, with plenty of lime and salsita reduced me to general incoherence. I don't have the eloquence to accurately describe how good this place is so I will stop.

In Monty Python's film The Meaning of Life, a boardroom full of stuffy men in business suits are called upon to present their findings on their study of the meaning of life. Their research led them to the declaration: "People should be wearing more hats." Seems like as good a statement as any. Of course, if you follow any of the world's vicious and despicable religions, you might disagree and refer to some psychotic mortal's teaching as the Divine word from above. Joesph Smith anyone? With this paedophile and huckster in mind I feel equally qualified to offer my own words: People should be eating more tacos! You can do so at Tacos Alonzo. Who's with me? 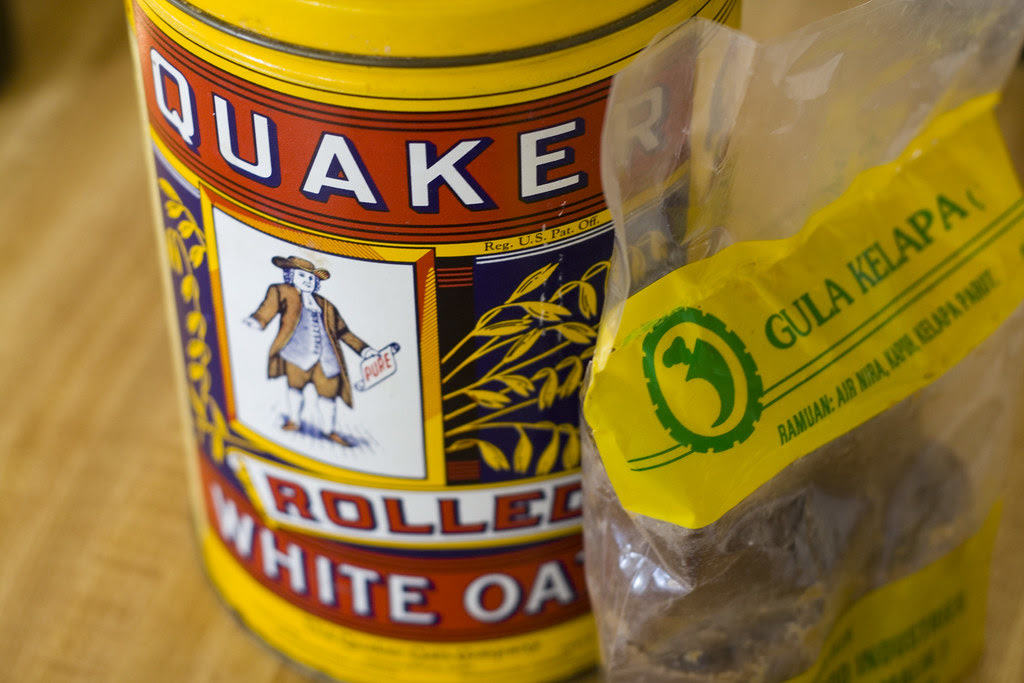 The Asian Culinary Forum event Asian Food Beyond Borders opened last night in San Francisco and I was in attendance. A separate blog post may or may not be written about that. The highlight for me, however brief, was meeting the folks behind eatingasia. Love the blog, love the writing, love the photos. Their posts go beyond the normal superficial observations of many a tourist or journalist, and the photos while of course stunning, manage to capture the humanity of the subjects and go beyond simply showcasing the exotic. I always learn something reading eatingasia, and that is unique. Too bad I was totally unable to articulate this idea on the spot. Anyway, after hearing me complain at some point in the past about the difficulty in acquiring decent palm sugar in the States, Robyn Eckhardt was kind enough to give me a bag of Malaysian Palm Sugar. 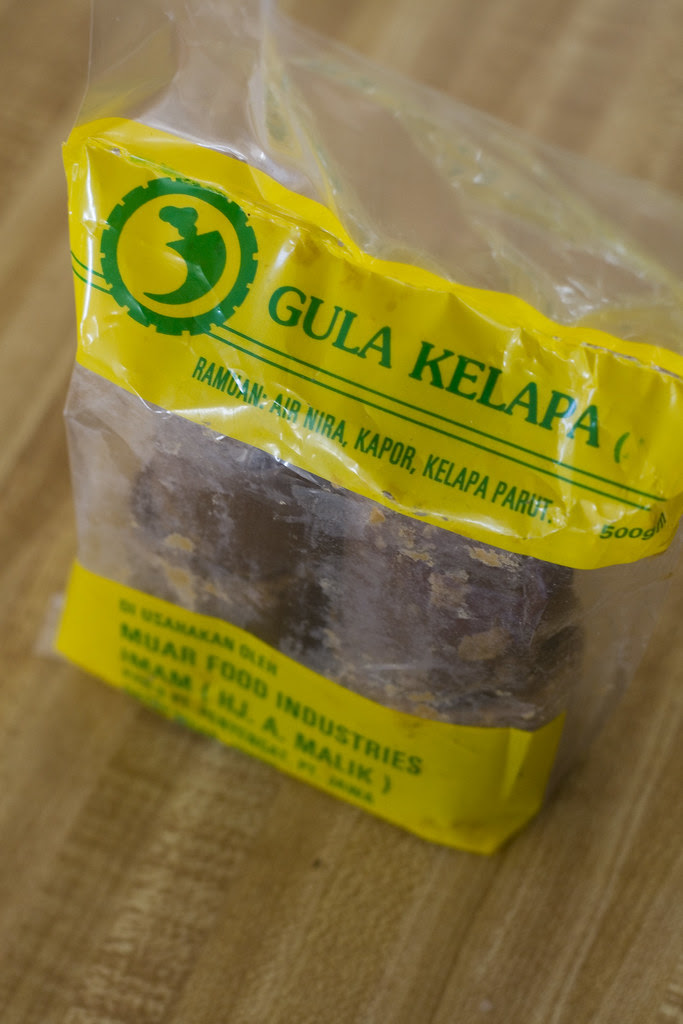 This might not seem like much to some of you, but it is a big deal to me. It is precisely the subtle (and sometimes great) differences in ingredients that make food in different parts of the world unique, and this type of sugar takes me to another place. It tastes nothing like any sugar you can find in the shops round these parts. At Robyn's suggestion, I made use of the sugar this very morning on my oatmeal. 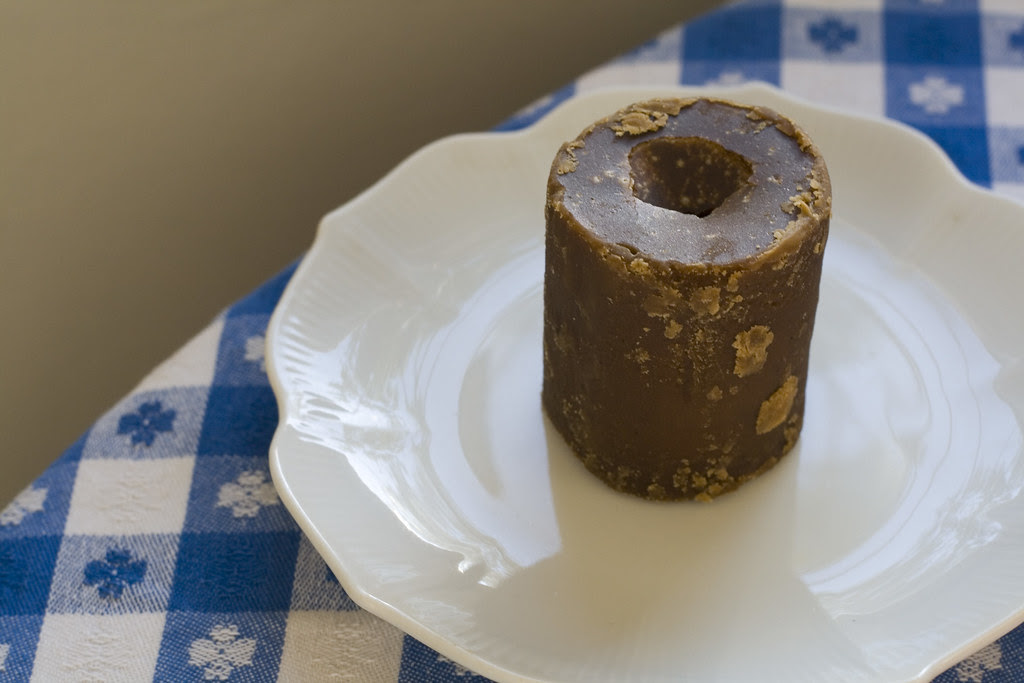 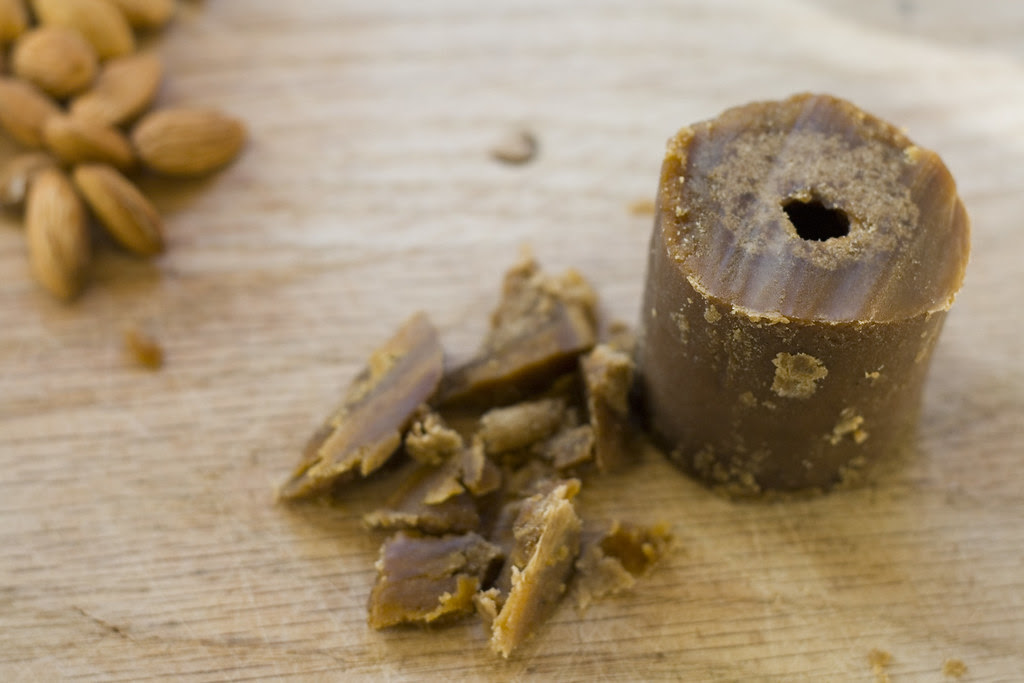 Oatmeal is rather idiot proof, so find your own recipe. There is nothing better than good ingredients to make your favorite comfort foods all more satisfying. Thank you Robyn! 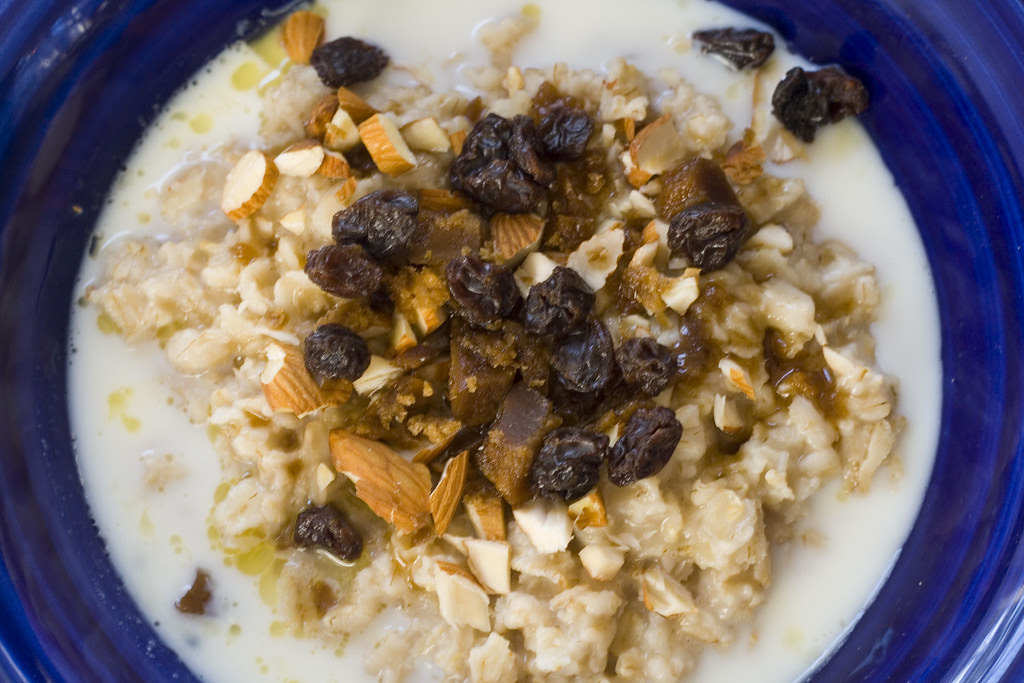 A conversation with a young Muslim man I know turned to Ramadan. I asked about the food, I asked about dates, and he wanted to talk about cake. No complaints. He promised me, and delivered one of his beloved cakes. 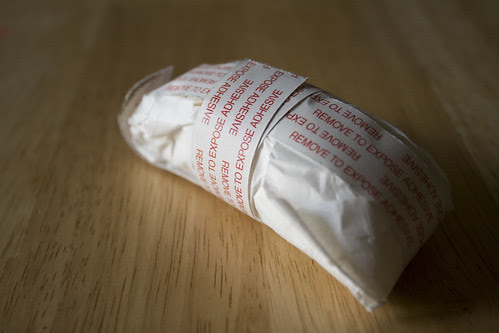 What he delivered was a cookie actually. It was made made by his mother in Algeria. I quizzed him about what all was in it, and how it was made. He said he'd get back to me. 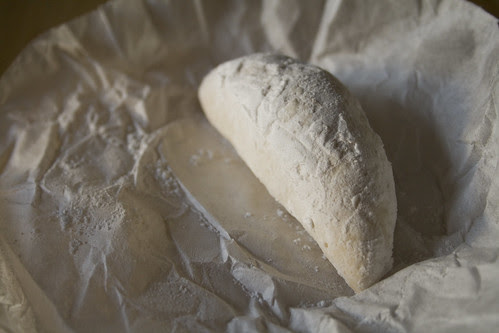 I've waited to do a post on this until I had more information. Trouble is, I haven't seen my acquaintance again and I have been unable to find anything at all on the internet. I'm hesitant to just show you a cookie that looks like an organ without any background, but maybe you can help me with the details. 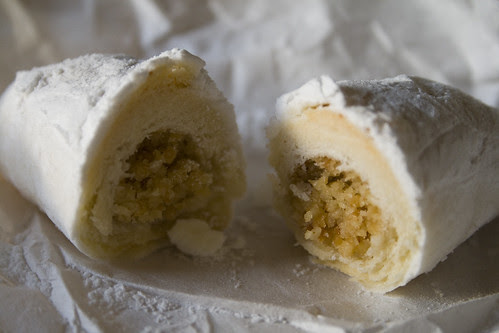 The outside is coated with floral powdered sugar. The cookie is flaky and light, and filled with what I believe to be almond. My friend told me that it is excellent with coffee or tea. This is excellent advice.
Posted by a at 2:37 PM 4 comments: