A Death in the Family (Warning: Graphic Images) 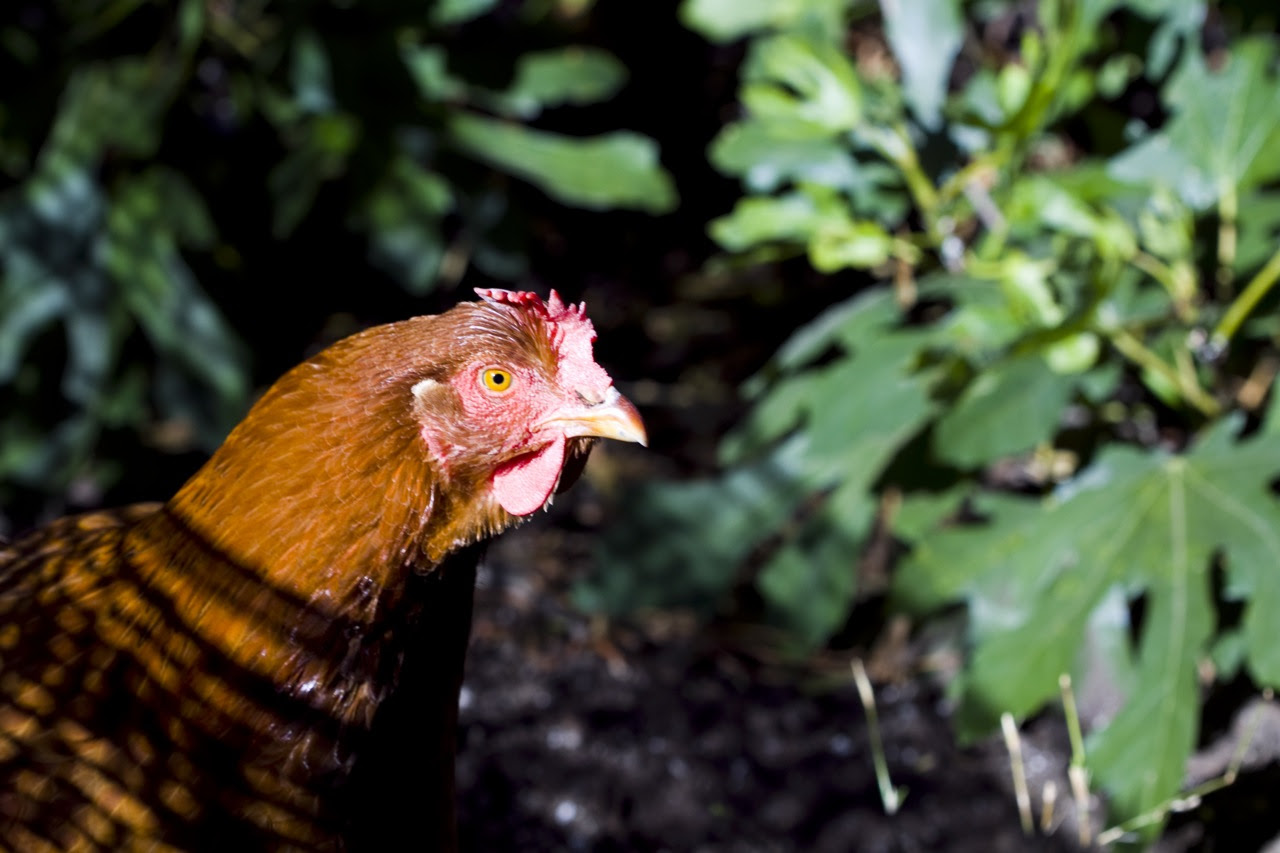 Friday afternoon when it was time to put the chickens away, all three of them were missing. It was about an hour until dark and we were clueless. We figured that they had gotten spooked and all gone up as high as possible. Eventually we found Pepper way up in a tree and got her down and into the coop. We searched all over and in the neighbor's yard but couldn't find Naked Neck or Big Mama. Not good. With the light fading we called off our search and decided to look for them in the morning.

When morning came around Naked Neck had returned and was wandering around the back yard like her normal skittish self. Big Mama was missing. That is, until I found her body, or what was left of it near the edge our lot. A wild animal, likely a raccoon, had helped itself to our chicken's flesh. 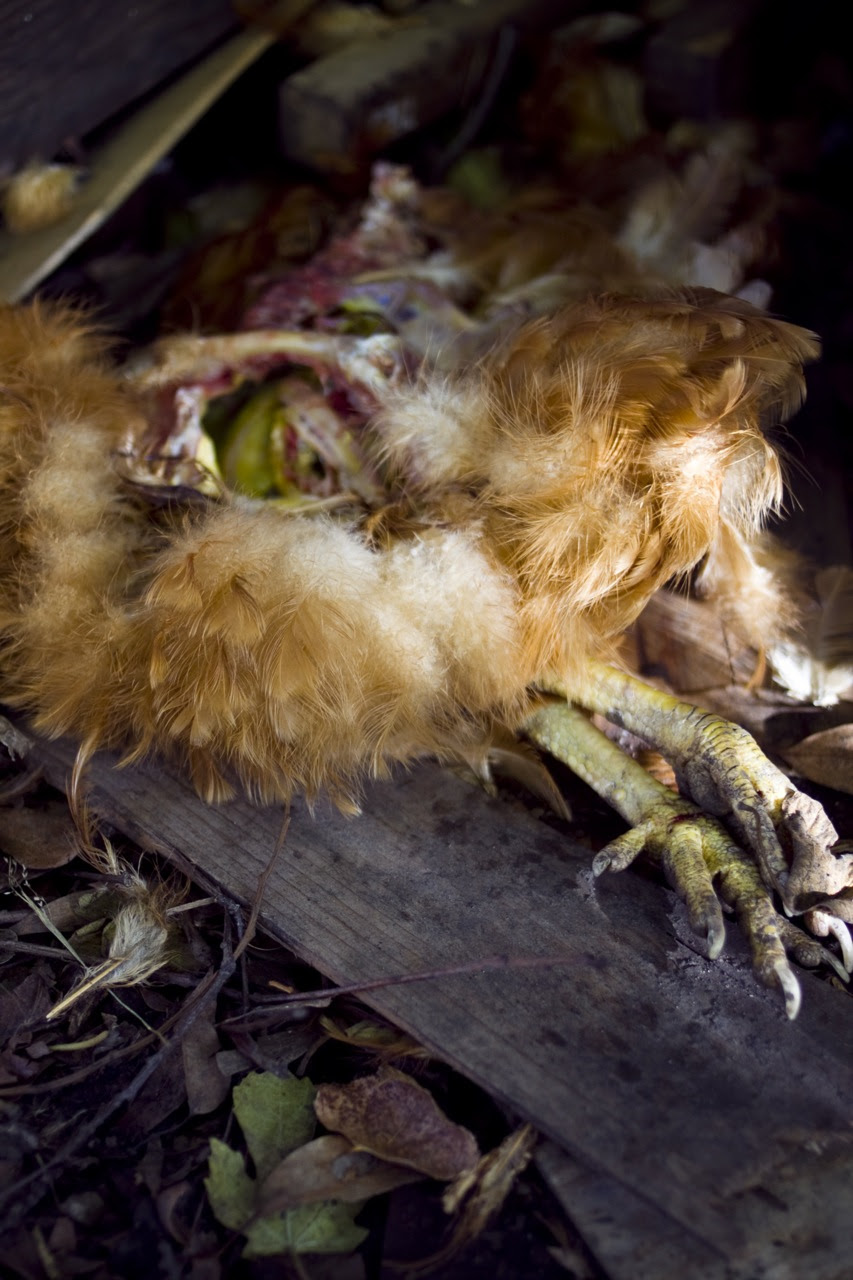 A couple months ago when Big Mama started to molt, she stopped laying. It was at this time that I jokingly suggested using her for soup. One of my roommates would have none of it so I dropped it. 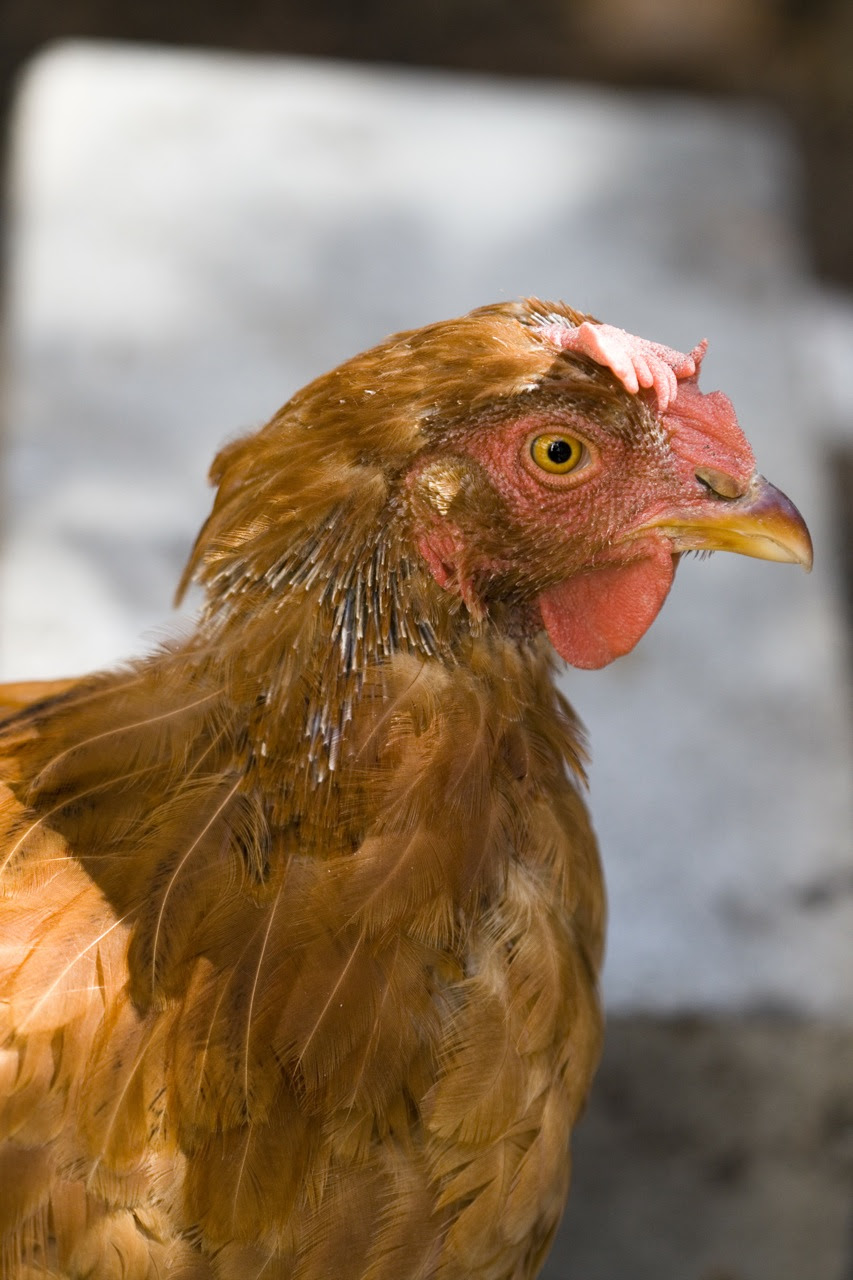 This represented a problem for me though. Many animals are abused to provide us with meat, milk and eggs. Having our own chickens has meant that we get to enjoy their eggs, and in return we give them a pretty good life. The depressing alternative is usually to live in very cramped quarters, maybe have their beaks removed, and be pumped full of drugs so they provide the materials for our omelets and eggnog. But what's the right thing to do when they stop producing? A petting zoo isn't really the most sensible solution. In this case something else took care of the problem.

And so the raccoons tore Big Mama apart and we heard nothing from inside the house. I could have given her a better death, and I might have used all the parts. Instead I buried the gutted and headless carcass next to the catnip. 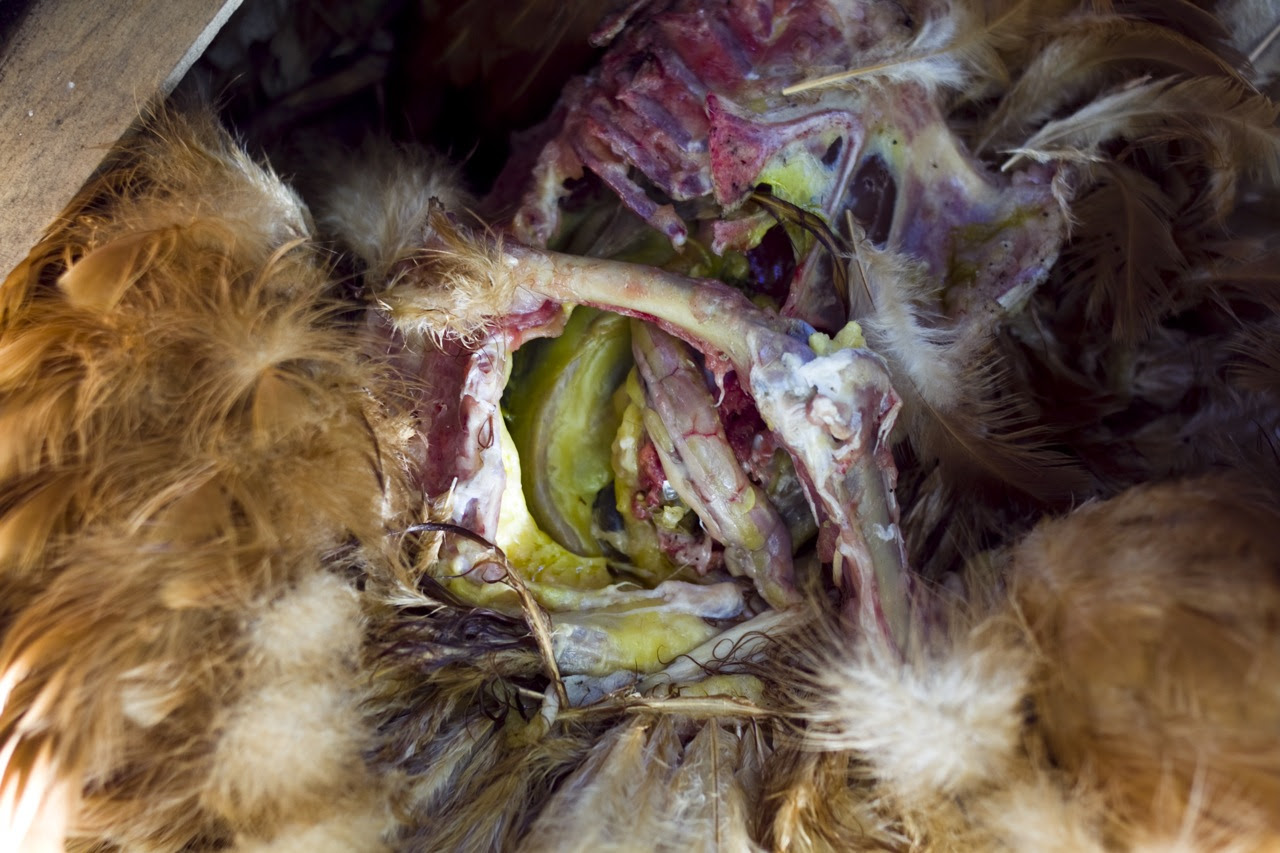 Maybe the chickens were spooked into the trees and were hoping to wait out the danger until the morning. Or maybe they just decided to call it a night early and fly up into the tree for no particular reason. If so, it was a deadly mistake. 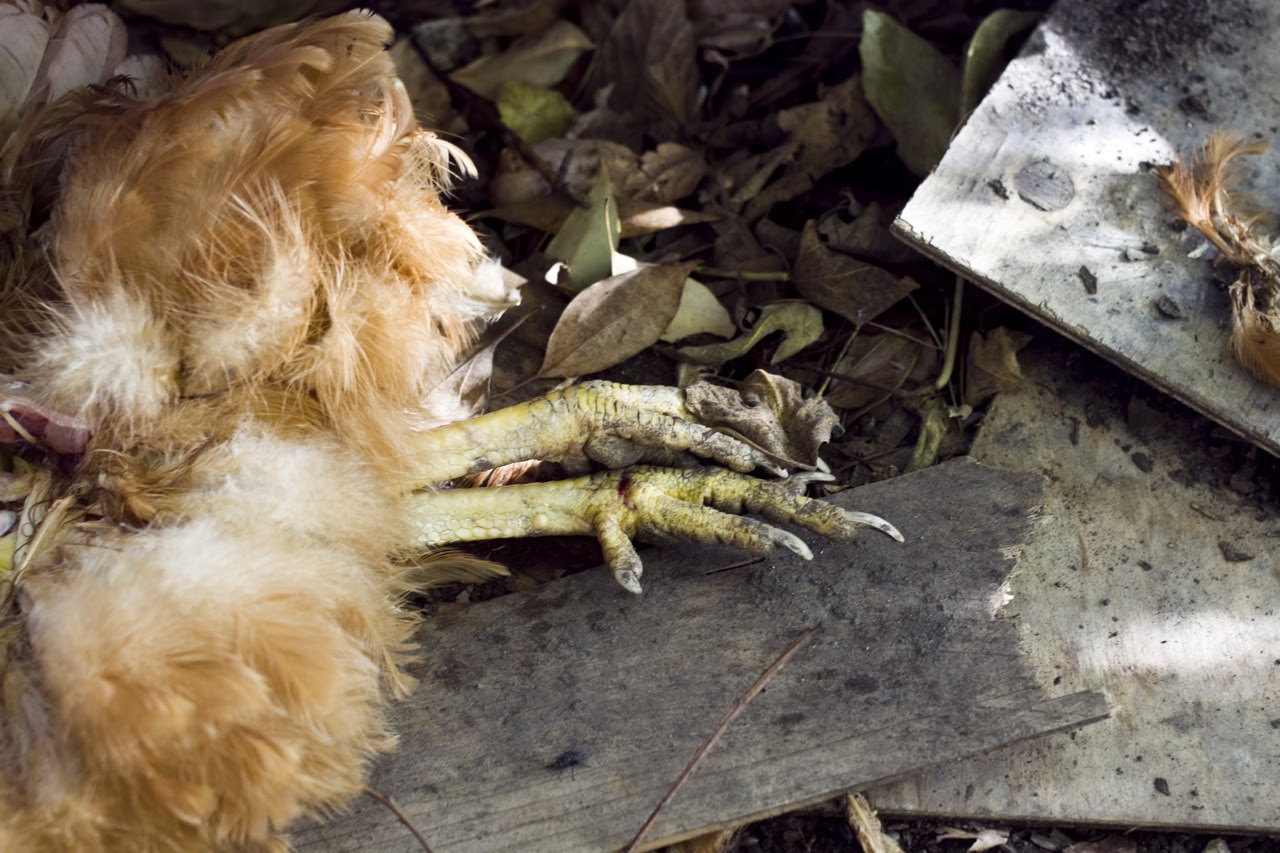 Sorry to hear about your chicken. Its always tragic when one of your flock is taken or their time is up. Just so you know moulting does not mean that the hen ceases to be productive. It just means that she is having a break from laying (usually over winter) Eventually you may get less eggs (after a few moults) but odds on they will start again in spring. I have one old girl in my flock at at the ripe old age of 7 she is still giving me at least 5 eggs a week. Don't write the old chooks off.. they may not be productive in commercial terms but domestically 3 x 5 eggs a week is still a lot of eggs :D

Hey, thanks for the comment. Yeah, 3-5 eggs is plenty. It had just been a couple months since she had laid any. She mostly made up for it in character. She was the top of the pecking order so now the other girls are lost without her.

So sorry to hear about Mama Chicken

I think any flock (especially a small one like yours) feels the loss of one of its members. I had a flock of 2 and the non-dominant one died. Even though the remaining hen was top of the pecking order it was very sad to see her keep trying to call for her lost friend when she had a tasty morsel to share. If you are going to replace Mama i would suggest getting larger point of lay hens and maybe get 2 so that you don't have one hen being picked on. I found that sneaking them into the coop at night made life a bit easier too. As i said i really feel for you- its funny i think only people who own chooks can understand how these funny little birds get under your skin in a way that you never expected.

Poor Big Mama. Rest in peace. My grandma used to not let any of her old chickens be killed for food due to her affection for them, till one time a male chicken next door tried to mate with an extremely old chook till it died. True story T__T

That's quite an image. So, I guess you're saying hen soup is a good idea?

Yes, I would say it is a good idea. Unless someone else regards it as a pet, then perhaps not, lest we hurt the other person's feelings T_T