There were two Thai establishments I had wanted to hit while in Portland. The first being Pok Pok. Pok Pok is the much raved about Thai restaurant which has been written about just about everywhere as well as showing up on a couple of television shows. I visited last march and had almost nothing to add to the chorus of praise. I figured a second visit might enable me a better formed opinion. Unfortunately they were closed.

A long walk across the river would take us to Nong's Khao Man Gai. I've written about this dish here and here. I was excited to try this place as this wasn't a dish I ever imagined really eating outside the kingdom. Closed as well.

Now here's a problem I've briefly hit on before. Eating this kind of food is tough as there's a lot of shit out there. Many meals end in disappointment. We search and search for the simple pleasures of these simple dishes that are super common in their places of birth. How much effort should we put in to get this transplanted street food? What standards should it be held to? Making a trip for something you like is fine and good, but sometimes the journey's just not worth it. The journey that the recipe has made, and your journey across town for that one place that hopefully doesn't make a mockery out of a dish you know and love. The shift from an everyday meal to a unique dining experience like we were looking for at the above is always a hard one for me to wrap my head around. Maybe it would be better to just eat something else.

Lucky for us, literally fifty feet away from Nong's was a cart simply named Somtum Gai Yang. That is, papaya salad and barbecued chicken. It wasn't the revered Pok Pok, but it was something. 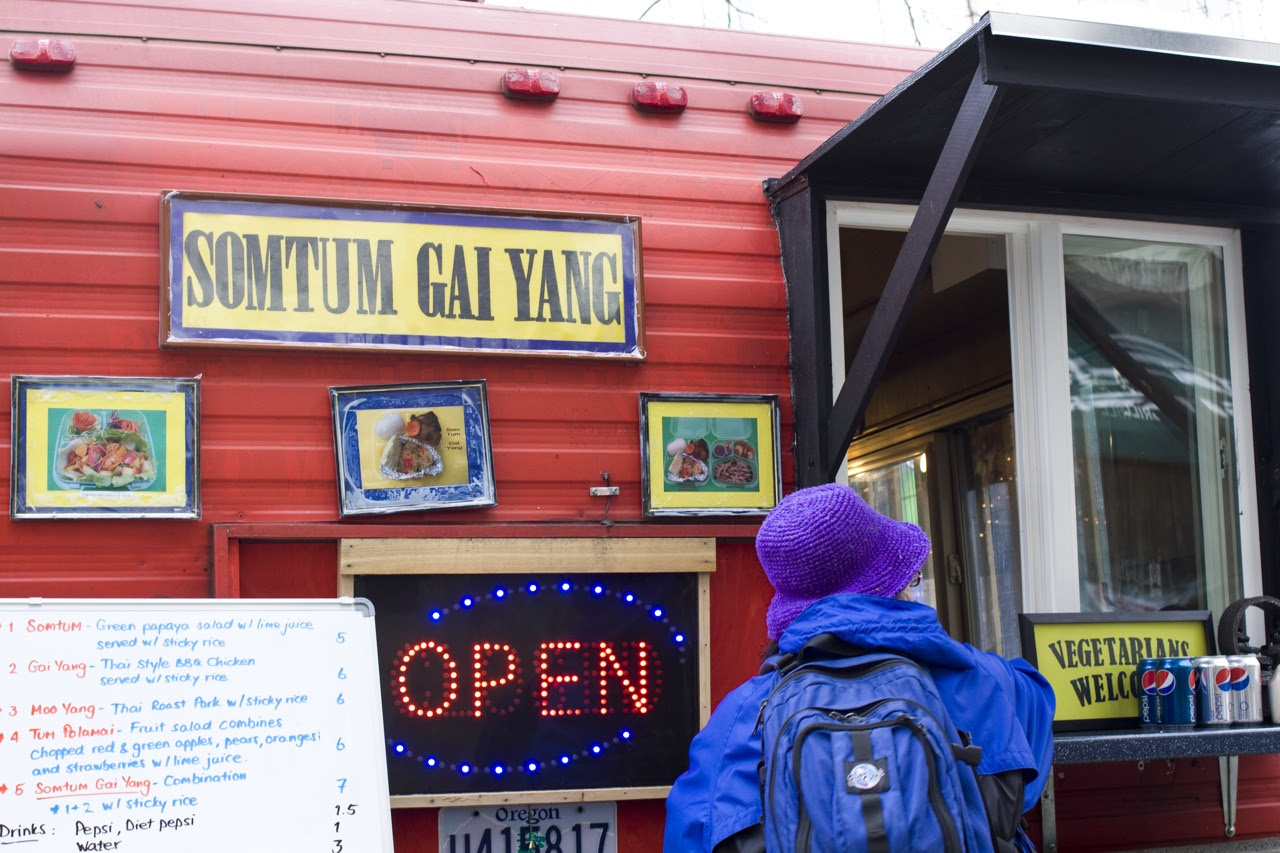 It's tough for me to review this stuff. It didn't live up to what I once took for granted in Thailand, but it was pretty good. The Som Tam while a little unorthodox and lacking dried shrimp, still managed to be salty, sweet, and spicy. The chicken was surprisingly moist and delicious. Better than your average dry and bland chicken so prevalent in America. 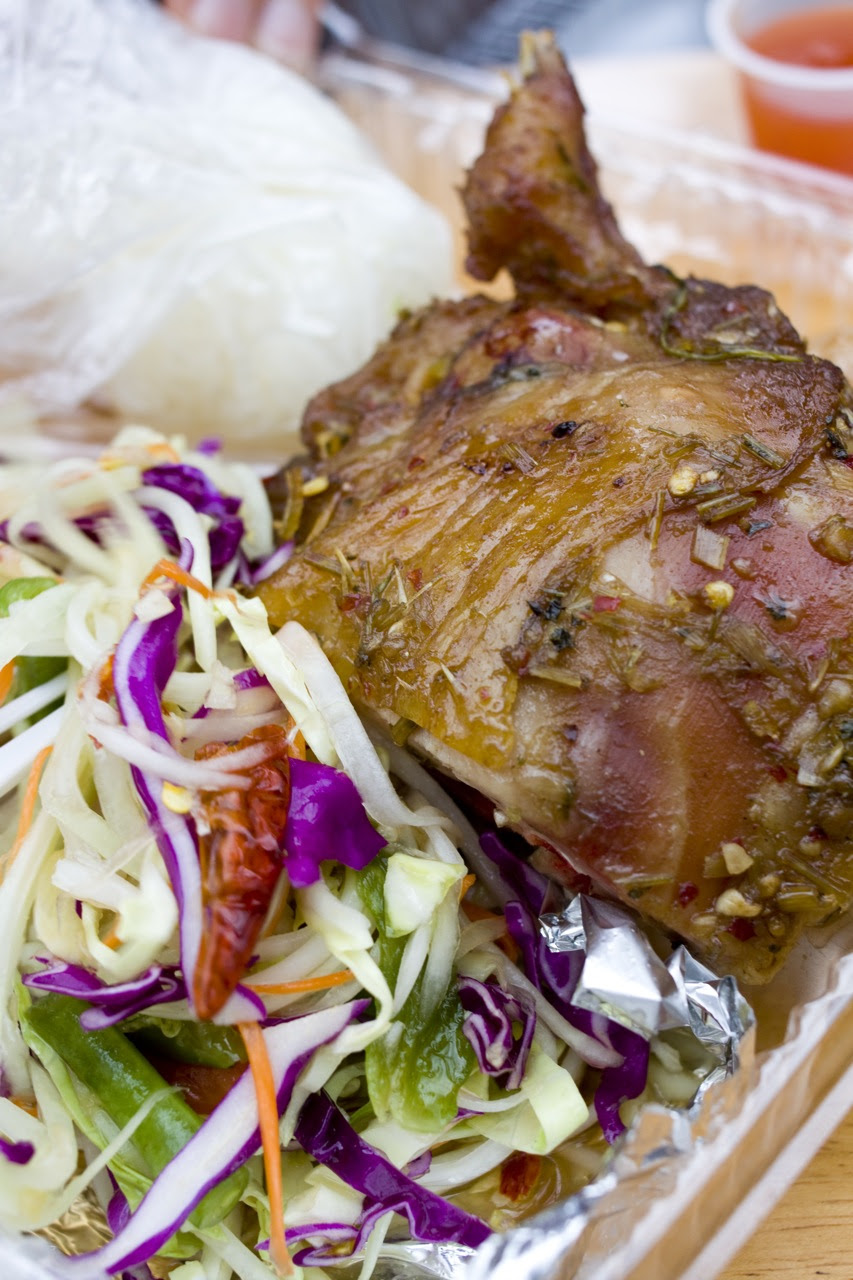 While I don't think I'll be rushing back, it's nice to see that this particular kind of Thai food is catching on and not only found at one token place in the city. Give it a try if you work in downtown Portland or are a hungry wandering manic.

A stroll along NE Alberta was strange indeed. I remember on in or around '03 when there was very little there, although back then it was already changing. Now, I am not nor have I ever been a Portland resident, so I don't have strong feelings per se about the rapid gentrification of formerly sketchy areas. But it is strange how quickly it happens.

Moving right along, I actually wanted to talk about the street food scene on Alberta. From a visit in early '09 I was mildly familiar with some good happy hours and street carts, but this time I wanted to graze. 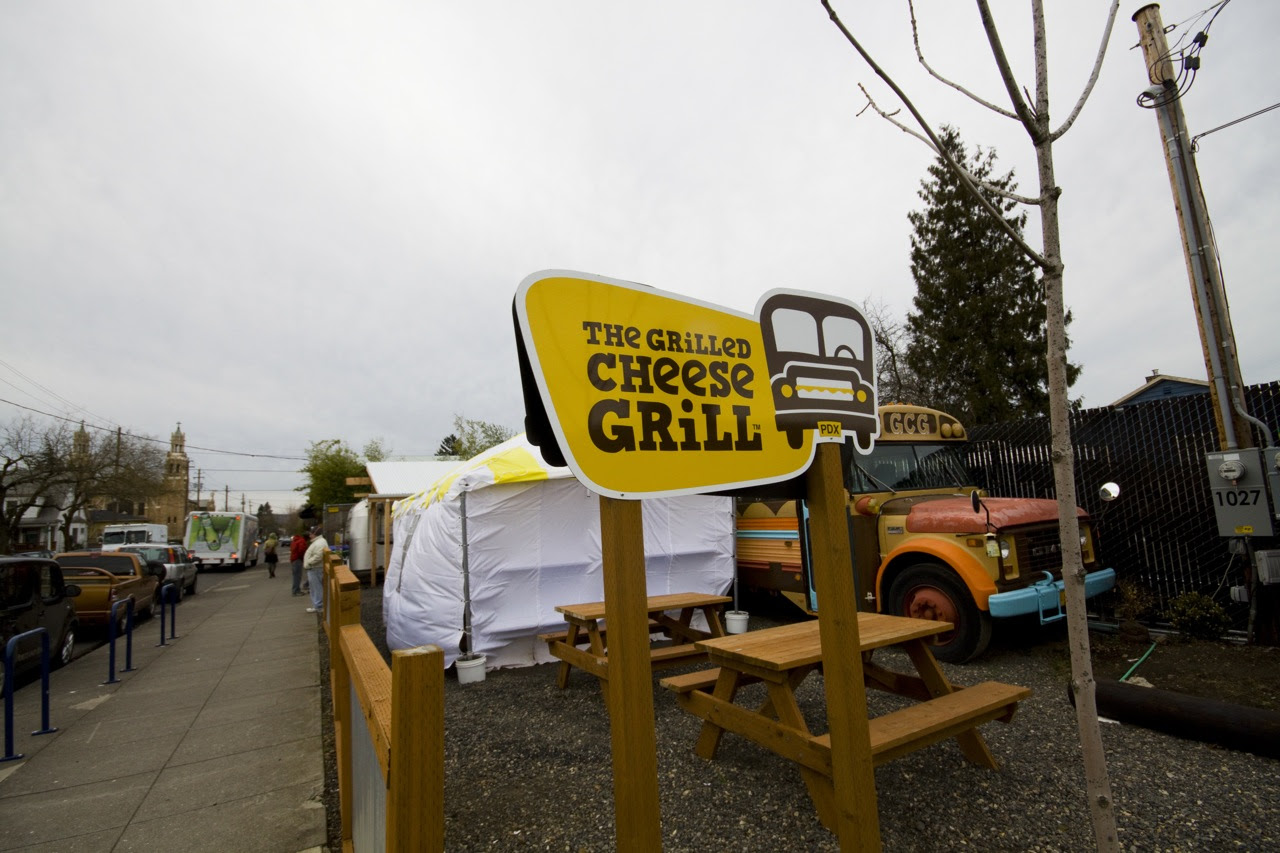 The Soon-to-be-Famous Burger Behemoth. We’ve done away with the bun and replaced it with two grilled cheese sandwiches. That’s right, two of them. One on top, one on the bottom. Pickles and American cheese inside one, Grilled Onion and Colby Jack in the other. Lettuce, Tomato, Ketchup, Mustard, and 1/3lb Burger in between. You won’t need to eat again for 2 days. Comes with a bag of chips and a case of napkins.


If you want to waste eight bucks and maybe shorten your life by a couple of years, you know where to go.

I thought the street food approach in Portland was interesting. For years, the street cart scene has been growing in the city center. Parking lots have been accommodating more and more stalls over the years. But this is different. In a quickly gentrifying area, they're filling their lots with carts and stalls. A sign of the recession perhaps? Or just a new approach to parking lots? 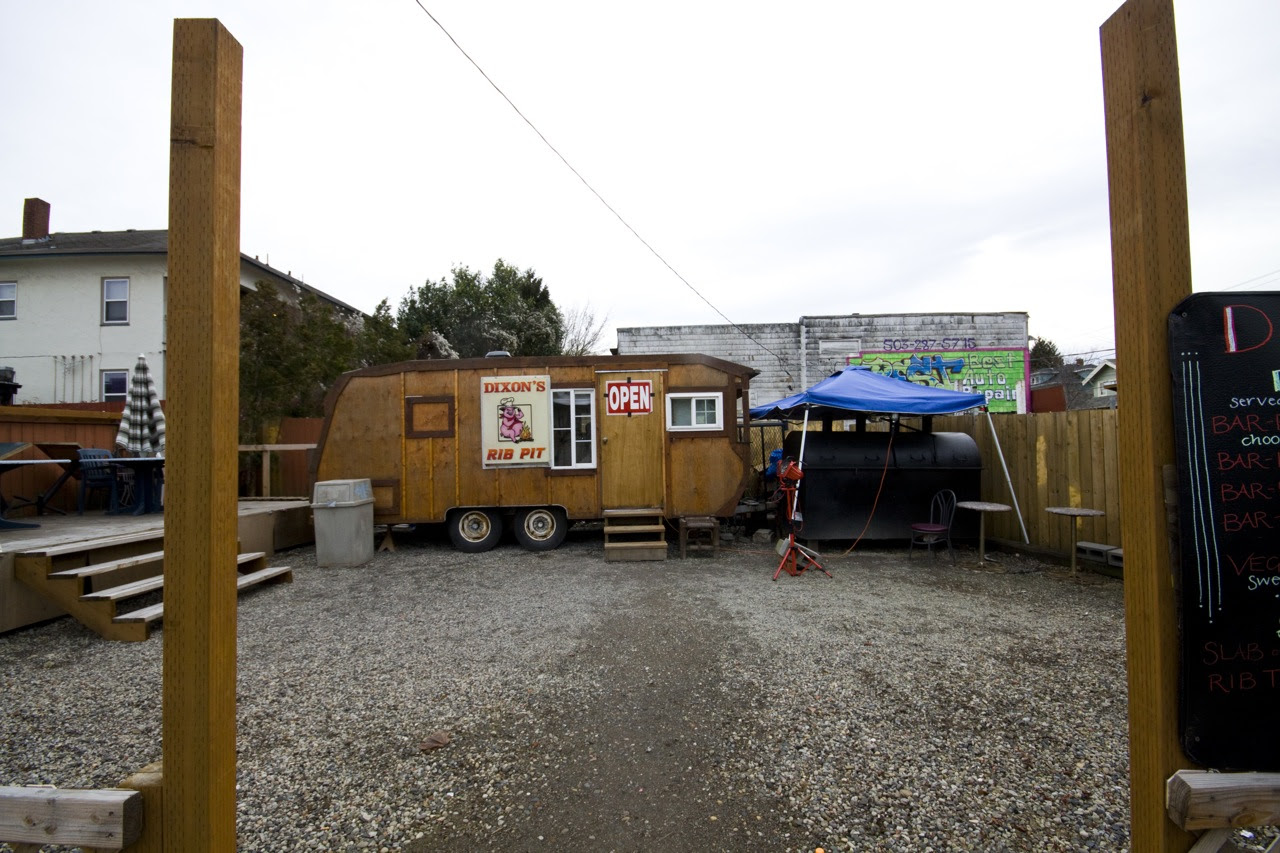 Unfortunately, the weather in Oregon is shit. Let's just be honest. It was cold and we were feeling depressed. Standing around outside of a stall just wasn't our idea of a good time on this day, so we made a compromise. We stumbled upon Toddbott's Triangles, a small Japanese themed eatery specializing in Onigiri.

The owner, Todd, spent a few years selling his Onigiri at all the local farmers markets recently. He purchased a shed off Alberta and put his cart inside. 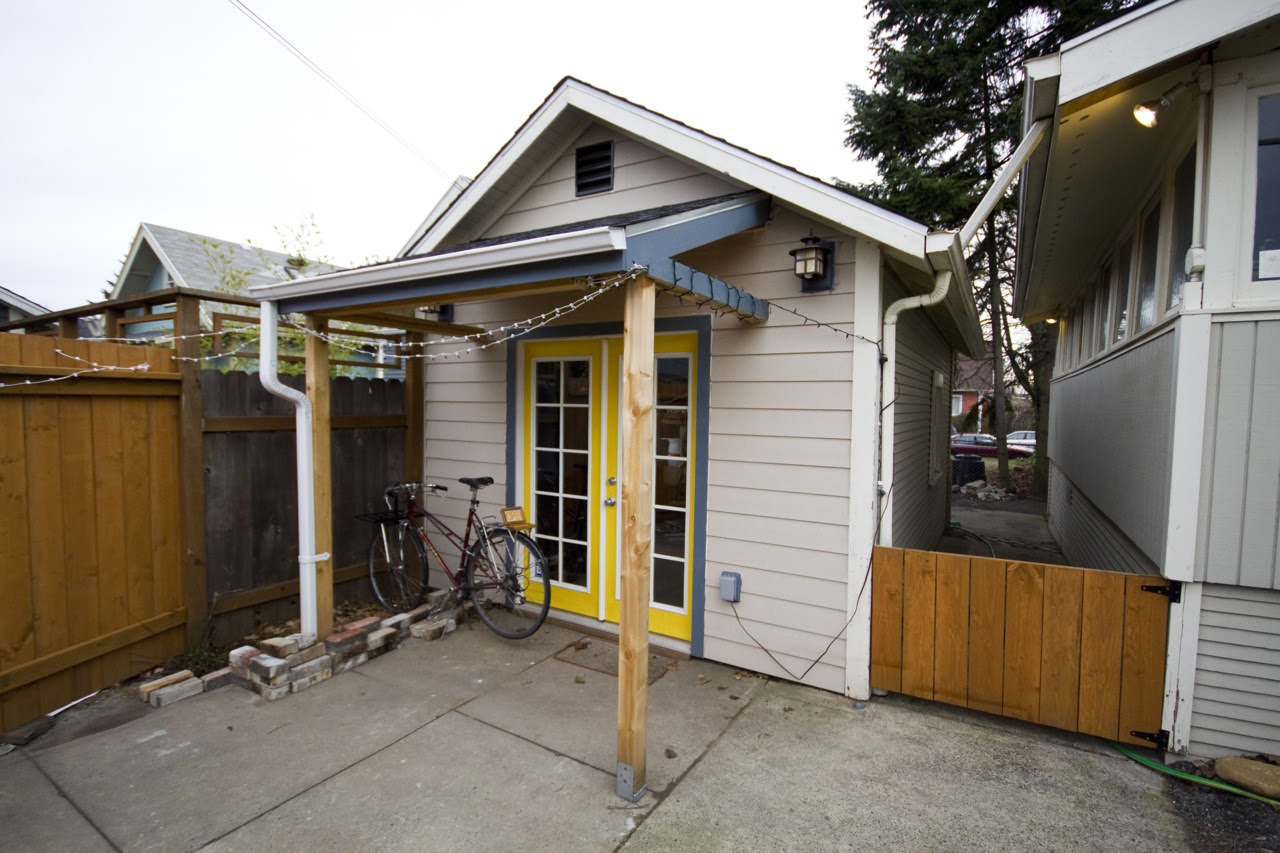 The small space provided a nice respite from the rather cold and depressing day. 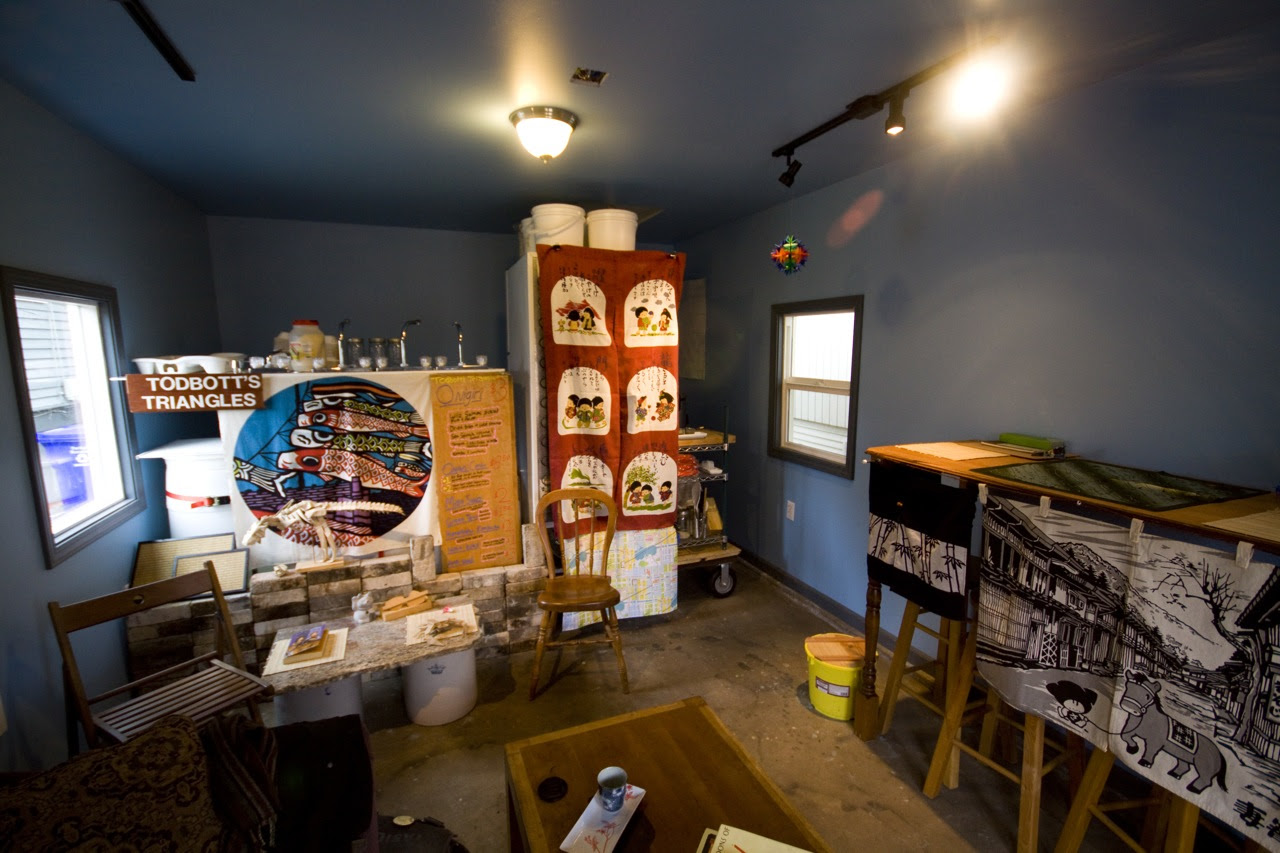 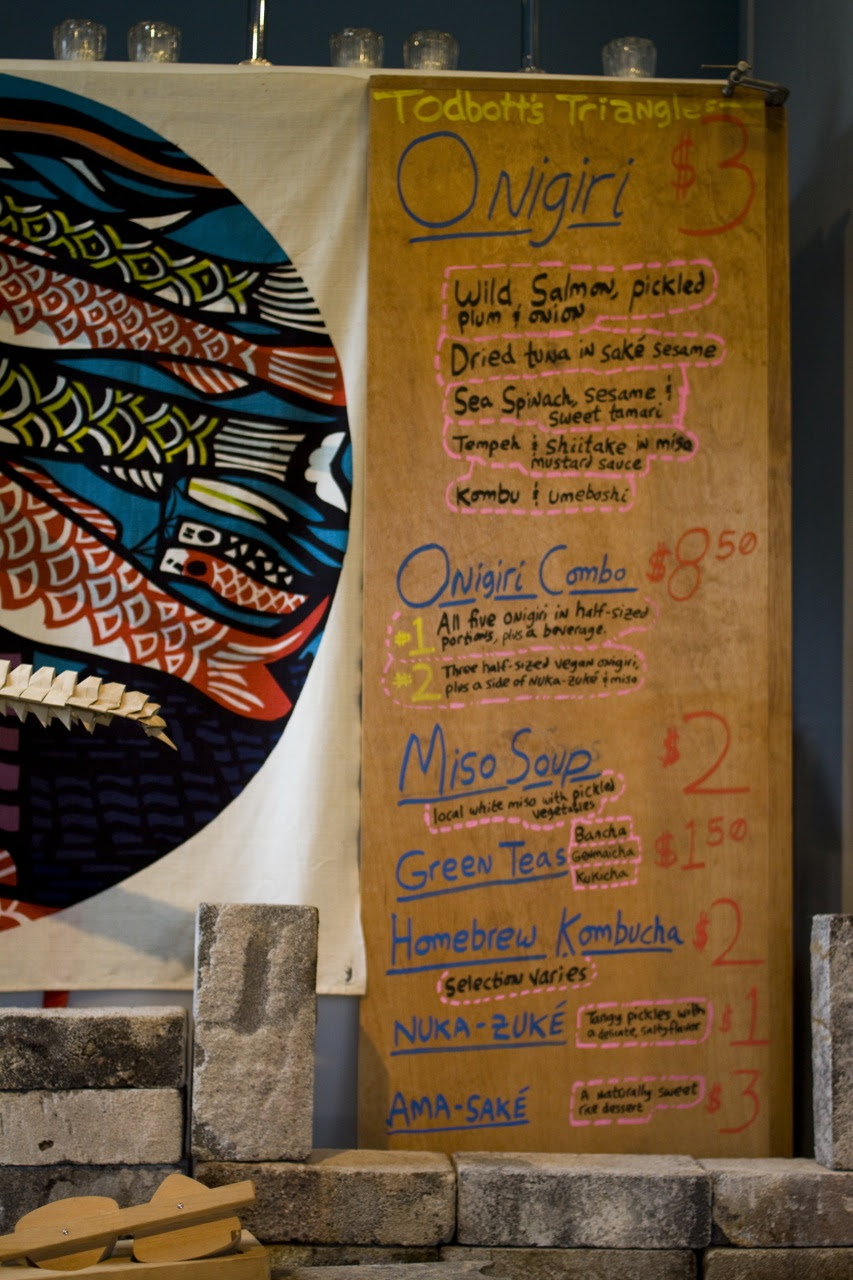 We ordered up a wild salmon, pickled plum and onion, and a sea spinach sesame and sweet tamari onigiri. They paired nicely with sencha, or green tea. This was a nice way to warm up. 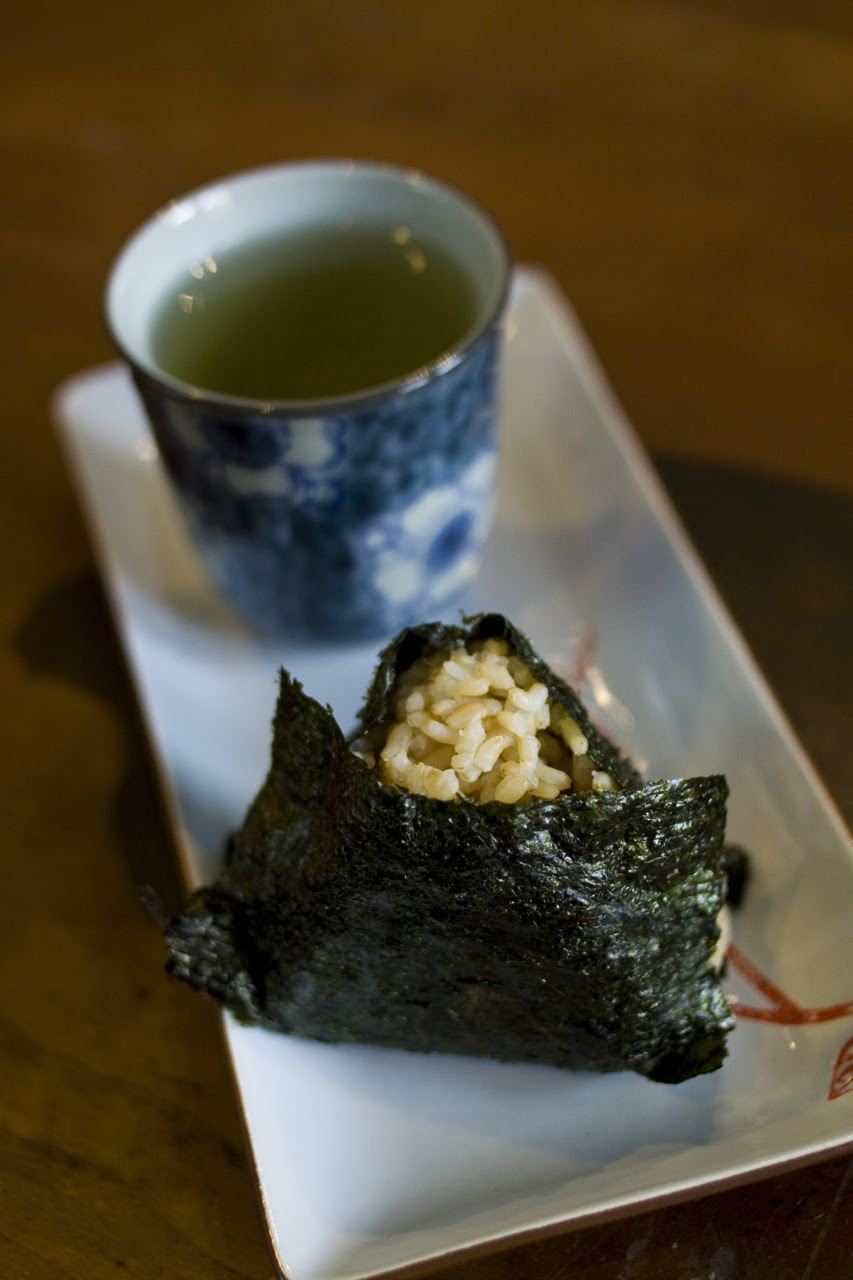 A visit to this cart inside a converted shed provided us with yet another cheap and delicious snack outside the conventional restaurnant mold. 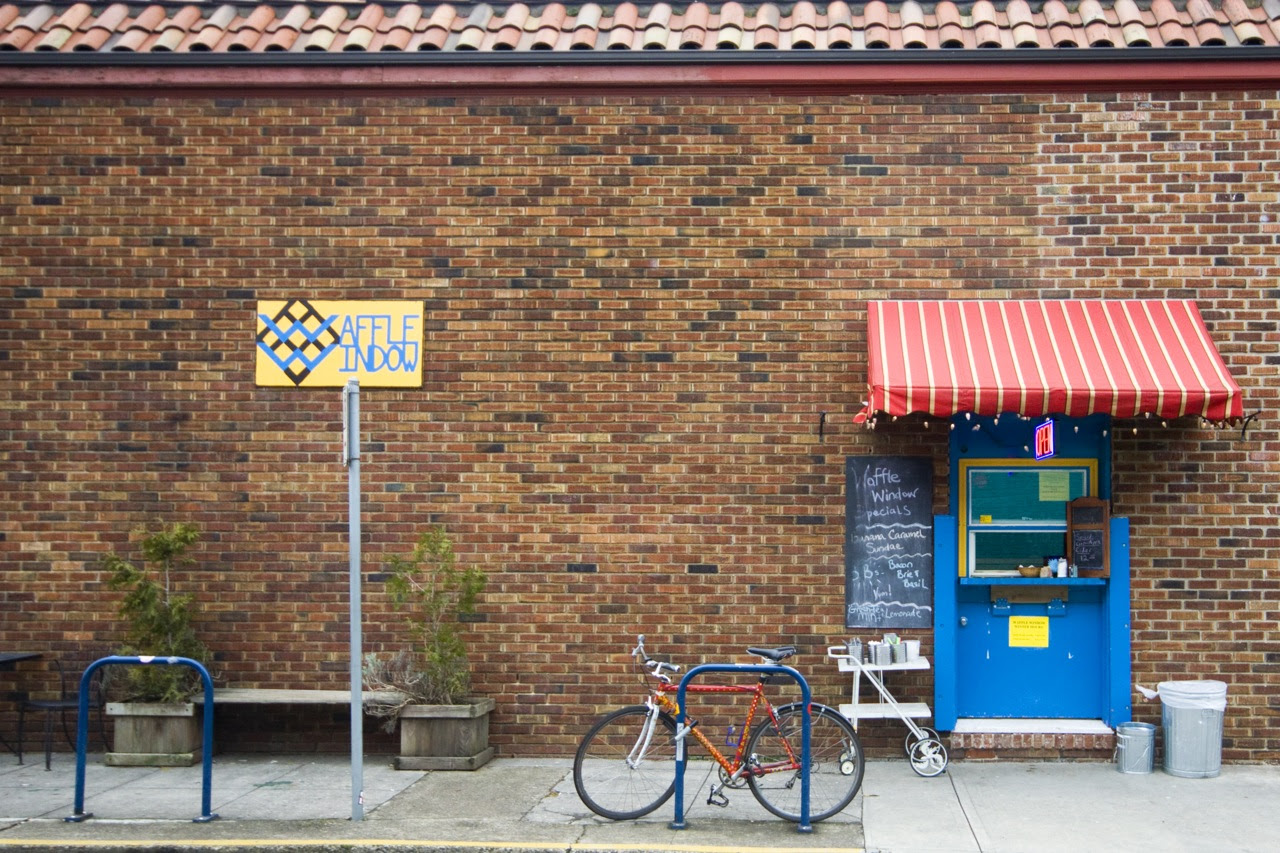 These days waffles are in. That is to say, Portland's Waffle Window is not the only place I've recently had Belgian Style waffles, but it's probably the best.

The waffle window is a pretty straightforward and idiot proof concept. It goes like this: you are hungry, not hungry, or maybe just underemployed and bored. You scrape together enough change to buy yourself a waffle before heading down the street to the next coffee shop where you carouse the job adds and wonder to yourself when the economy might turn around so you can one day shop at American Apparel. They have nice sweaters and tights modeled by porn stars and have good labor practices that attract young urban professionals to their stores in neighborhoods which are being gentrified. But really, I can't see why more windows aren't festooned with waffles. And if you go to the Waffle Window, your waffles are both delicious and cheap. 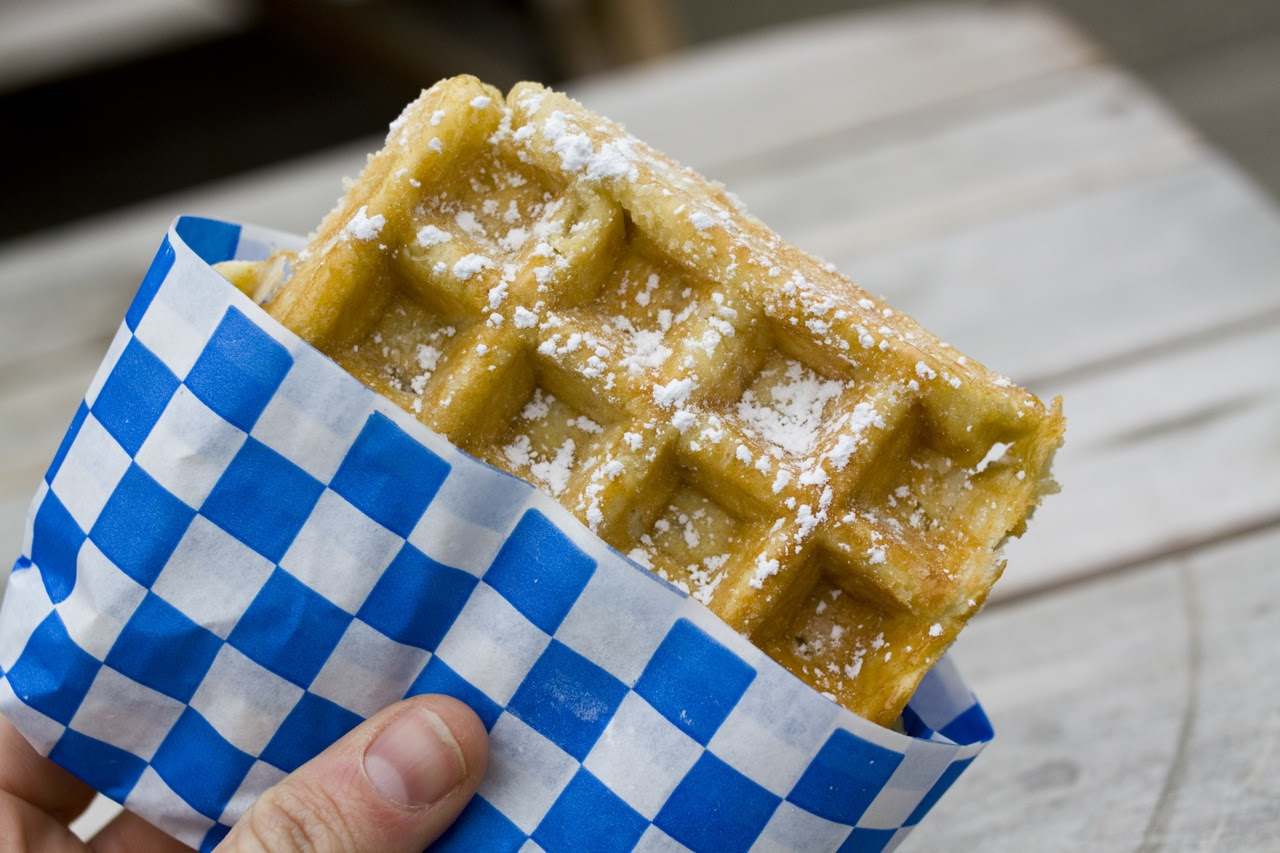 On our first visit we had a round of fresh plain hot waffles which gave us comfort on the rather cold day.

On the second visit, and my second plain waffle, one of my companions had a chocolate dipped. While it certainly looked nice, it did not arrive hot like my simple plain waffle did. 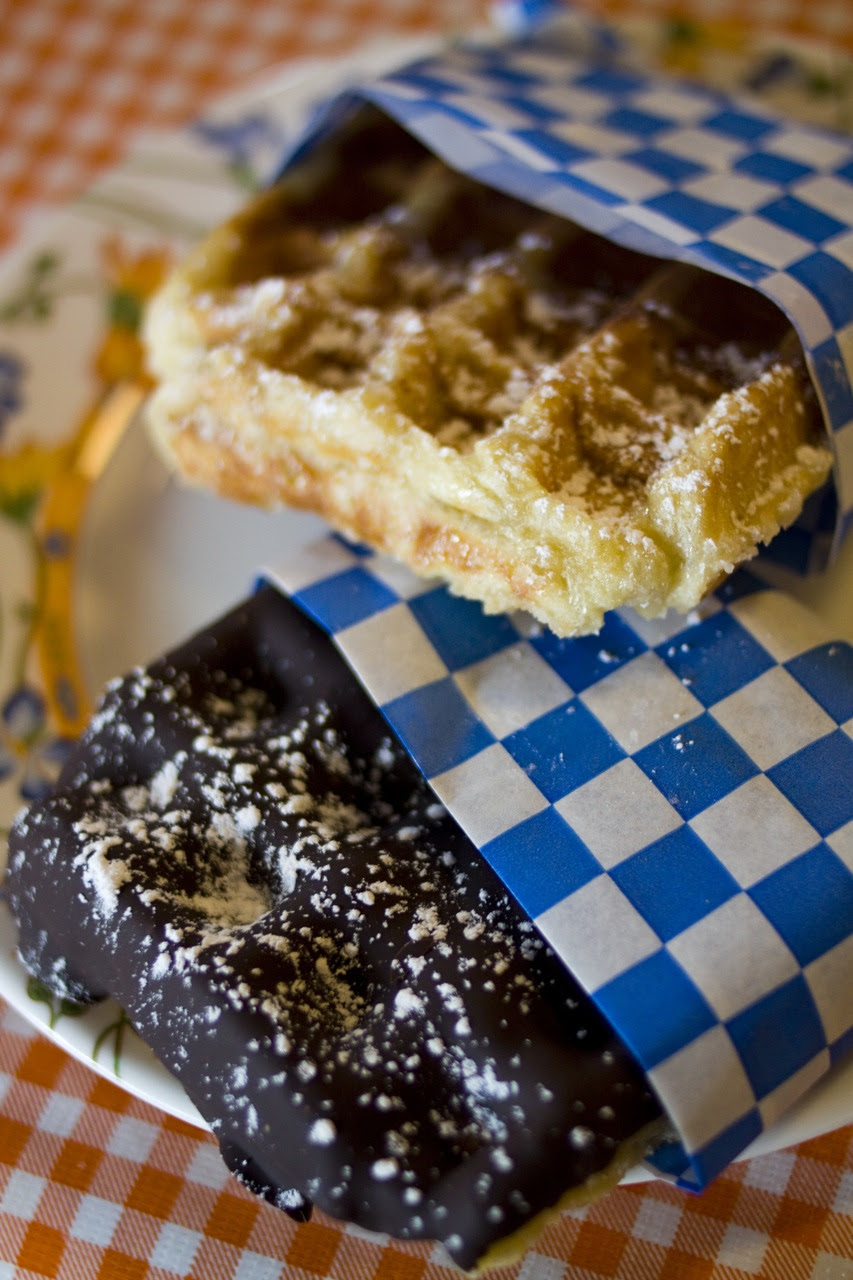 My other dining partner ordered a chevre, spinach, and tomato waffle which was eaten in the adjacent restaurant where there are a few tables set up for a few wafflers. 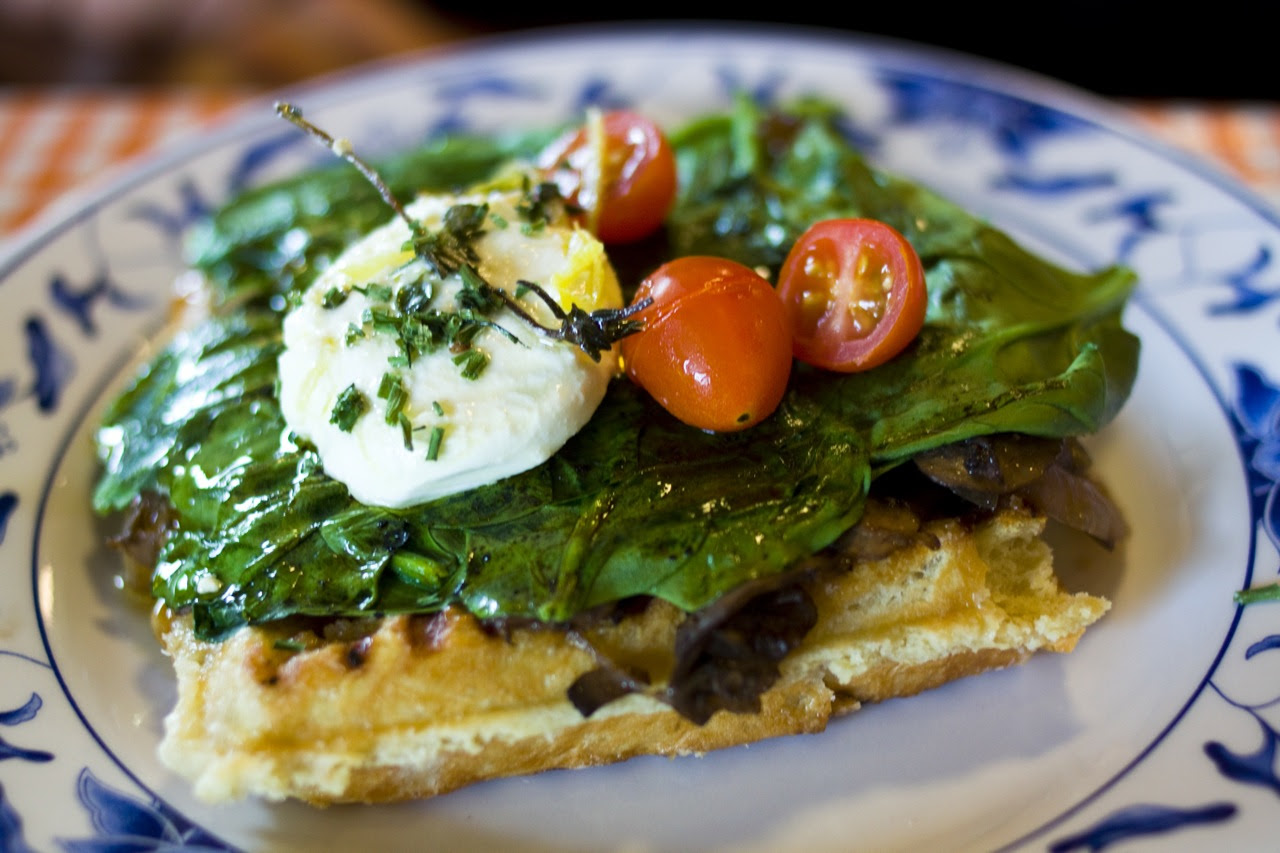 While it certainly looked beautiful, we didn't much care for the savory ingredients on the rather sweet waffle. I recommend a plain waffle and a leisurely stroll. Save your remaining money for pills or maybe a (un)happy hour.

Potato Champion and the Dept. of Highfives 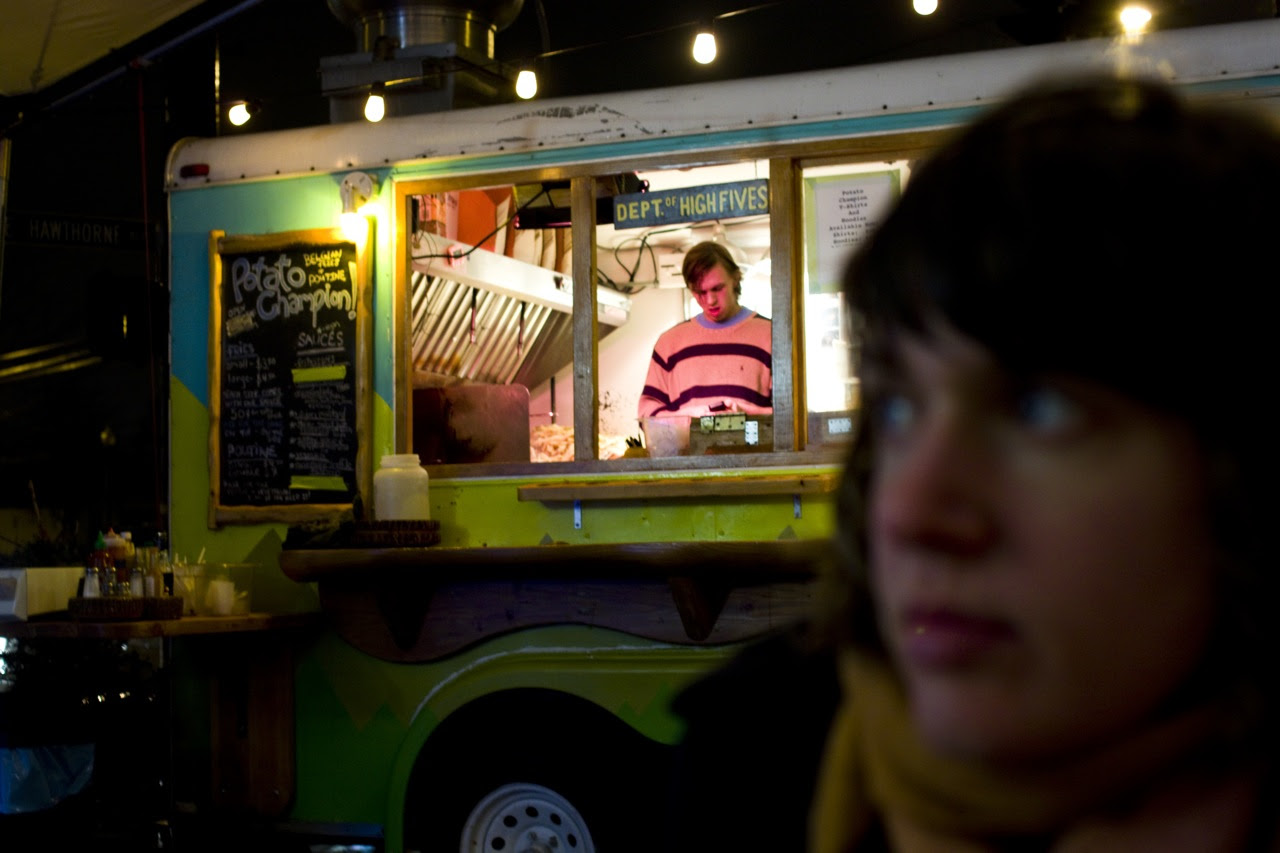 If you've been reading this blog for a while, you just might remember Potato Champion. If not, you are forgiven. I can report that it's still excellent, and maybe even better than before. A small poutine, fries with gravy and cheese curds, was more than enough for a midnight snack for two. 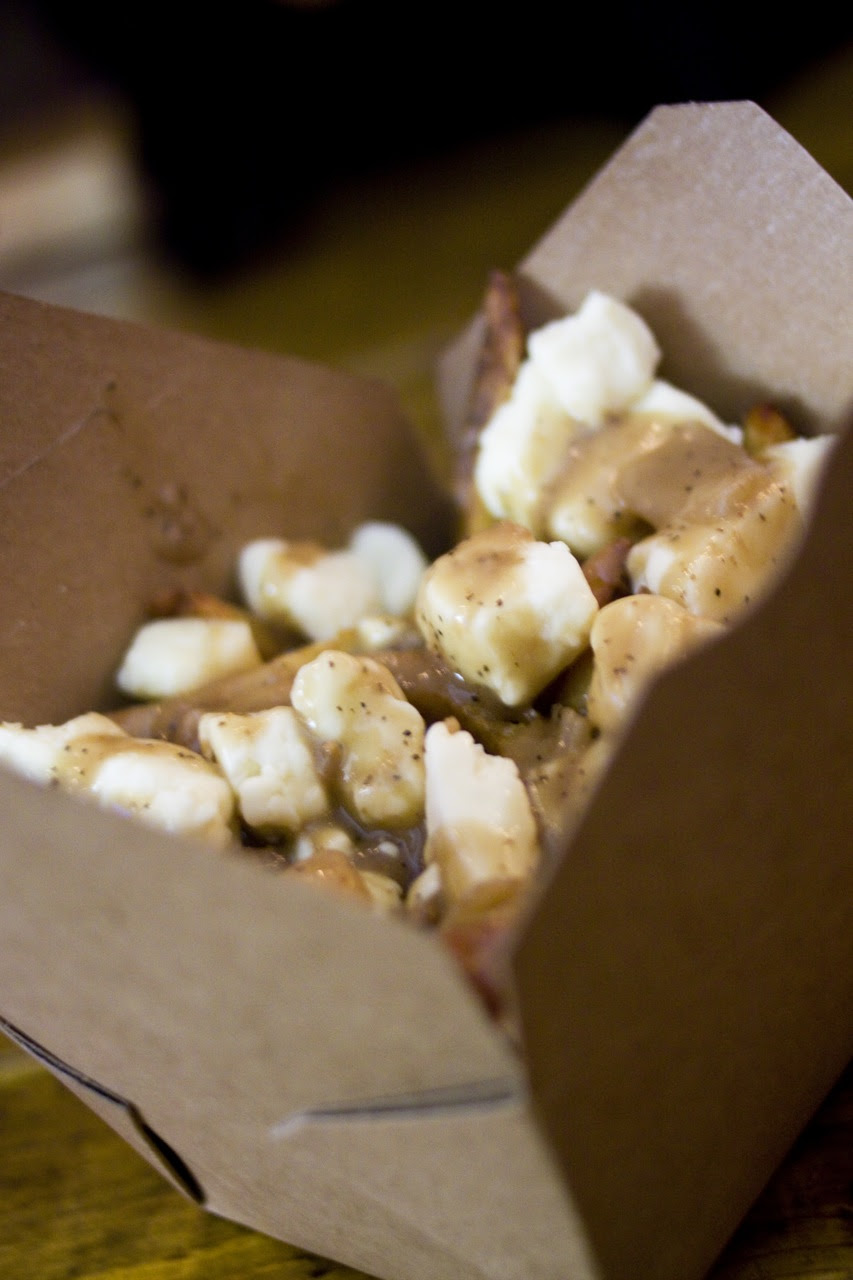 As America begins its unpleasant yet not unexpected decline, at least we can hope for a revival and possibly a new golden age of street food as costs raise, real wages stagnate, and people turn to the streets for some sweet relief. Or maybe: Portland, Oregon is an anomaly where many people can and will eat better than you or I in our larger and more diverse cities.

Well, the activity has only increased at 12th and Hawthorne with a healthy group of semi permanent street stalls serving up a diverse spread to a not particularly diverse clientele. Portland has a growing army of street stalls while my current home, the Bay Area, cities have made it almost impossible for purveyors of street food. Some vendors who can find no legal avenue have been given citations and even arrested for selling a sandwich. The city of Portland has obviously made some very different policy decisions and the street food scene is thriving. More on this later.

Potato Champion
SE 12th Ave and Hawthorne Blvd
Portland, OR 97255
Tuesday - Sunday 6pm to 3am
www.potatochampion.com
Posted by a at 2:49 PM No comments: 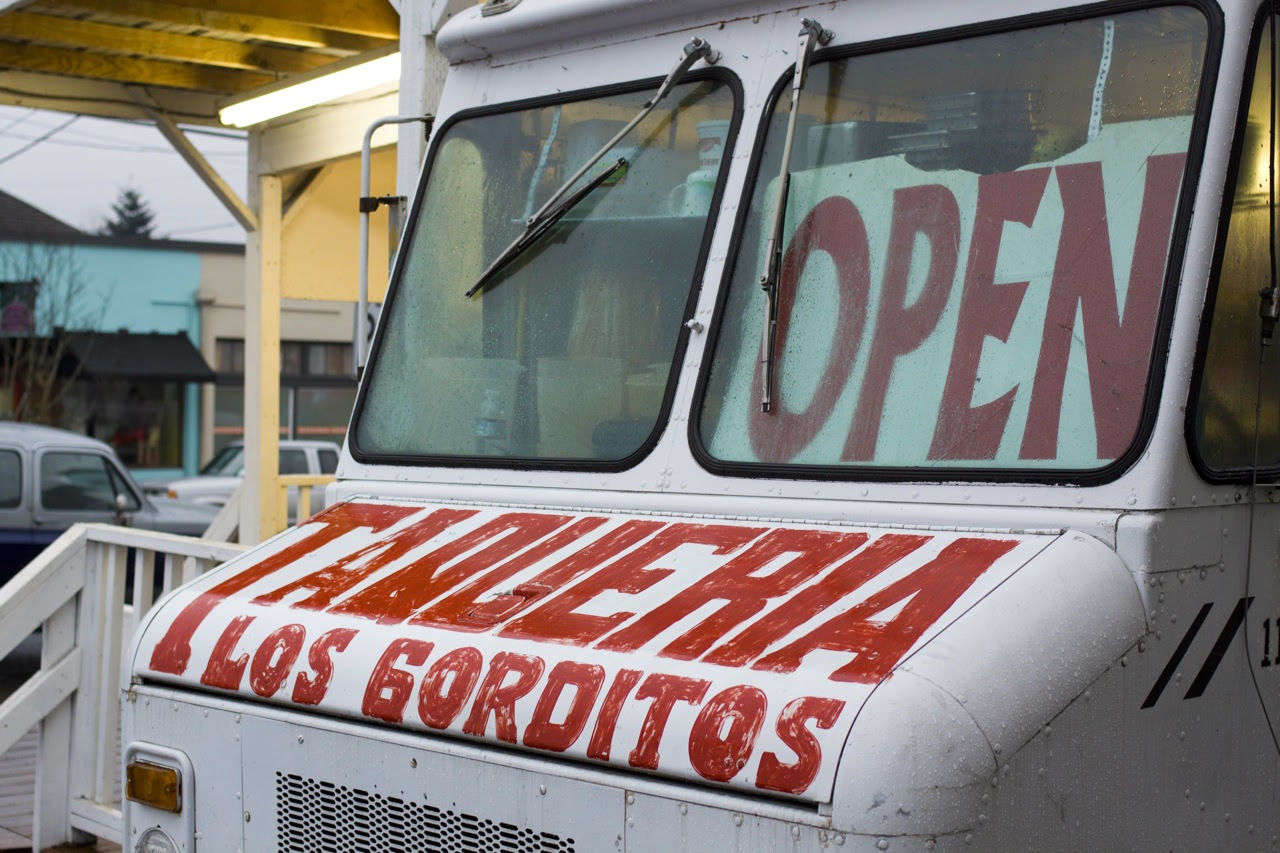 With all the great coffee and local beer I've been consuming in Portland, the best place to start is with a taco truck. The Mexican diaspora is not limited to California, so let's take a look shall we?

After one too many cups of coffee a snack was in order. Rapid fire speech and jittery hands needed to be calmed down with a bit of masa and maybe some grease. D and M recommended a taco truck so off we went. I'm a man of taco trucks, so this was a scientific expedition. 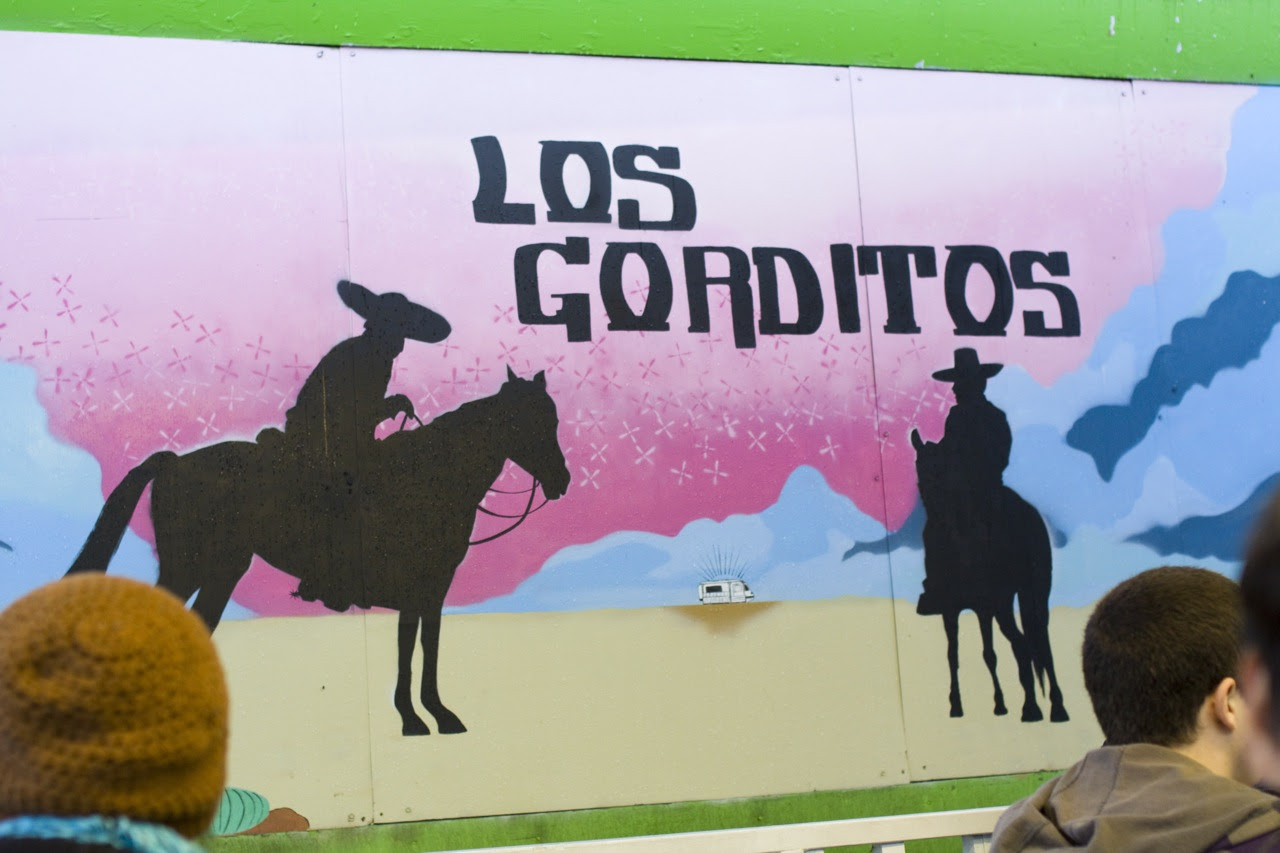 Where to begin? Well, the usual suspects were lined up next to a few new faces. Vegetarian and vegan tacos were on offer.

Dr. N and professor E ventured to try the soyrizo tacos. Kind of like chorizo, but made from soy, get it? 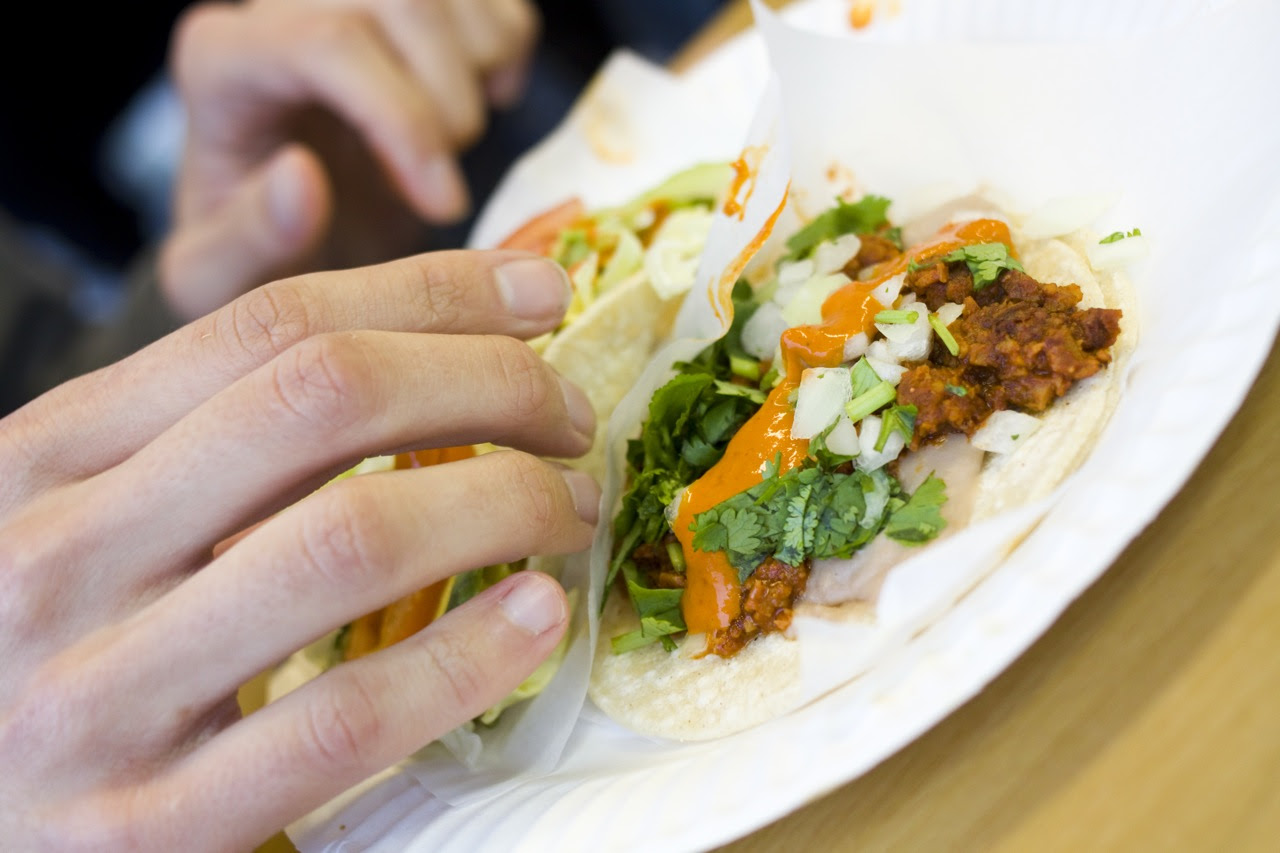 I'd love to tell you all about these but they didn't even reach my lips. I forgot to have a taste. Another patron asked the proprietor what soyrizo was, and he just shook his head and said "I don't know." 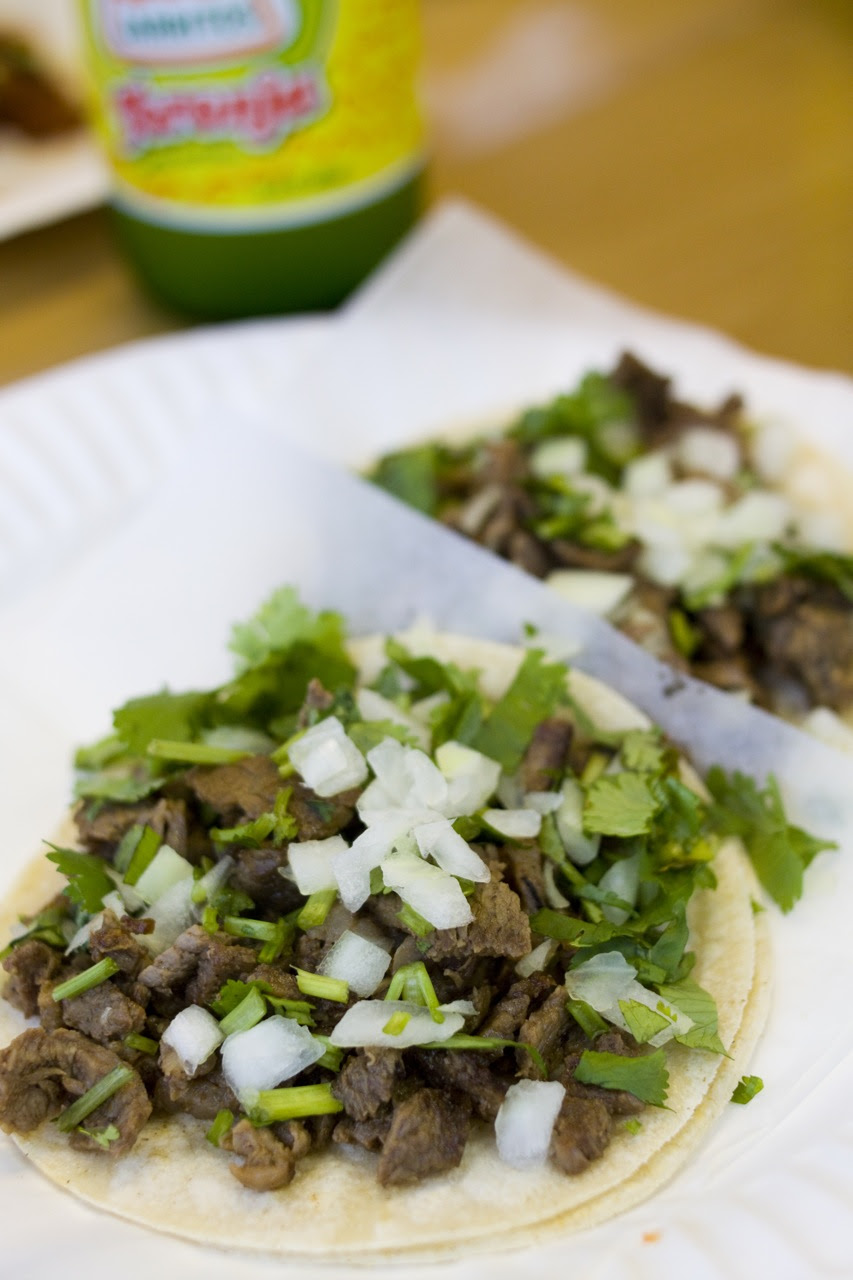 A few radishes, carrots, chiles, and limes and this might have felt more complete. Nothing to write home about as I'm spoiled by the tacos in the Bay Area. Otherwise, a decent and cheap place to grab a bite. Also, if you like to enjoy ethnic food as long as it conforms to your lifestyle, the vegetarian and vegan tacos might be right up your alley.

Hello from Portland, Oregon. My home away from home. A city I visit frequently, but have never lived. Every time I visit, I eat and drink better than just about anywhere else. On my last visit back in March of '09 I ended up with a pile of photos but not a lot to say. 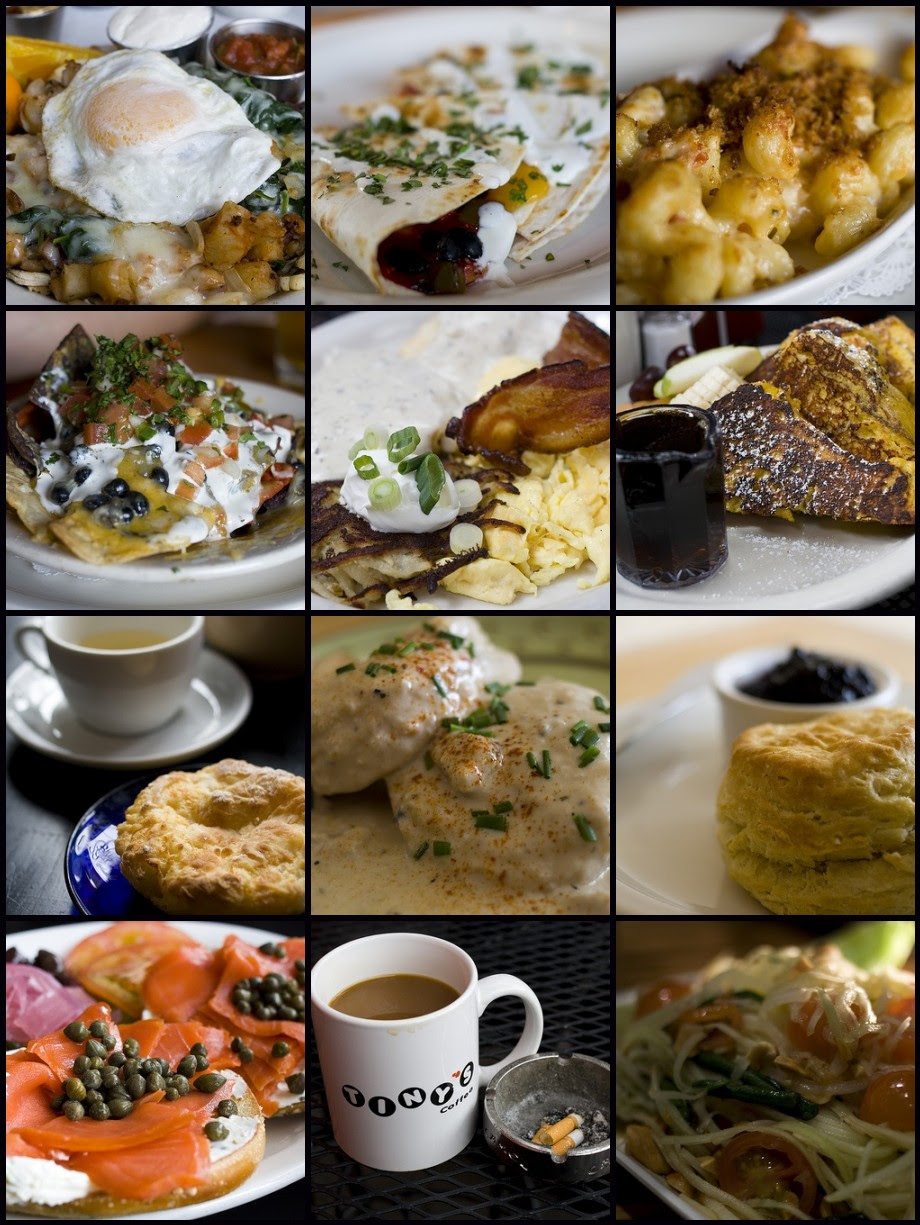 Last time I checked, Portland was the micro brew capital of the world. There's killer coffee. There are heaps of happy hours. With lower rents, it's a place where chefs from around the country come to open restaurants. Getting a good meal is like shooting fish in a barrel. You just can't not eat and drink well here. And all this leaves me with a serious case of writers block. Let's see if I can do better this time.
Posted by a at 9:14 PM 2 comments: