Street food is all the rage in San Francisco. A growing fleet of twitter based chefs have taken to the streets with brief communiques telling followers where they can find them on a given evening. Craving a creme brulee? A curry? Filipino Adobo? Look for them on twitter and then if you are extremely lucky, you just might get something. Their hours are short, their supplies limited, and popularity impressive. I've had the last couple weeks free to explore my newish city and have found the opportunity to sample the twitter carts exactly zero times. Maybe it's because I don't have an iphone. Maybe my timing is just off. Maybe I just find the whole thing boring. Maybe this is all a bunch of hot air.

The other day I was craving some tacos. Excellent tacos. Instead of looking on twitter to see if one of the army of twitter vendors might grace my neighborhood, I chose a taco truck that is always in the same place. What a novel idea. I had been hearing praise for El Tonoyense so I made a taco date.

A friend and I took a liesurely walk, ended up in front of one of a truck, made an order, and parked ourselves on a sidewalk between two cars. What could be simpler? I ordered three tacos with tripitas. My friend tried one of them, a chicken, and pastor. Her favorite? Tripas. 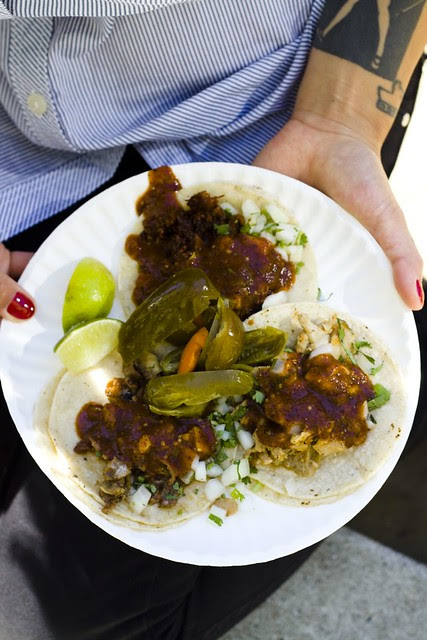 Solid. As I had heard, El Tonoyense know their tacos. Nuff said.

The current twitter movement makes a lot of sense given the overly restrictive licensing and zoning laws. This makes a the product more or less questionably legal. While the end product does reflect the diverse tastes and population of San Francisco, as of yet, it still serves a very small population. Are you one of the lucky ones who have actually gotten your hands on (insert twitter food cart name here)? I have better luck scoring drugs throughout the city and those are illegal too.

At the moment of this writing a few of the better known carts aren't serving anything up for a few days. In other words, the immense popularity of street food has not been met with an impressive supply.Things are changing and this city is slowly making efforts to speed up the licensing process for the hungry hordes. So far, the current street food phenomenon is mostly limited to planned events and festivals. You're unlikely to just stumble across a diverse group of carts on any given night.

In closing, when I want to eat some street food I don't want to go on a scavenger hunt. I certainly wouldn't warn anyone away from their favorite twitter cart, as the reviews have been solid. However, there already was and is reliable street food in the city.  Visit El Tonoyense on Harrison (and a few other locations) street and have your fill whenever you like.

Those vehicles that will be carrying edibles that do not easily go bad may just be plain inside, Best Food Truck In LA