NIck's Crispy Tacos is a well established taco institution in San Francisco. And for the longest time I couldn't really take them seriously. C'mon: it resides inside of a club. And with a name like Nick's, I just assumed some sort of abomination by some burned out surfer with one too many boozed out trips to Baja and visits to Sammy Hagar's Cabo Wabo. I was wrong of course. It just took a few years to see the error of my ways.


After a cruise up the very dangerous polk street yesterday, my companion suggested a stop at Nick's. Two Baja style tacos arrived and impressive they were. Perfectly batter fried white fish, green and purple cabbage, all topped with creamy and slightly spicy sauce. A few squirts of lime and I almost forgot that I was in the Marina. Almost. (Or is it Cow Hollow?)  My only complaint was that the tortillas were shown no love at all. I don't think they even touched a comal. Had they even briefly touched a seasoned grill these tacos would have been an A-plus. 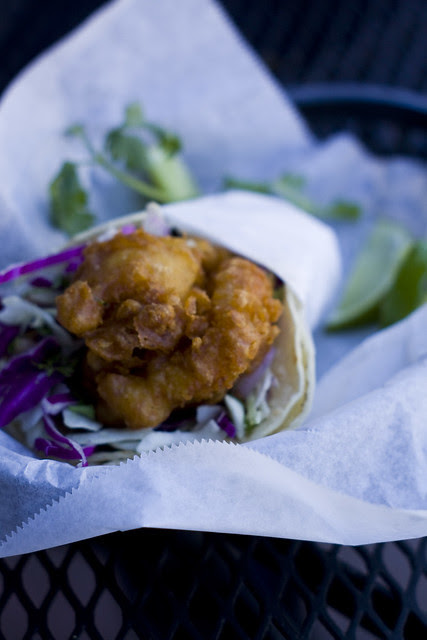 After ordering I noticed a sign begging patrons to save parking on Polk Street. In other words, Nick's was one of the local businesses fighting proposed improvements to Polk Street. Polk street is something of a cluster fuck at the moment. It is the only north south corridor for people biking in the neighborhood. And cycling is exploding in this city. Unfortunately, so are the accidents. Needless to say, the city is working on improvements to main thoroughfares in order to ensure the safety of those not behind the wheel. However, a few of very vocal business owners are doing their best to stop SFMTA improvements on Polk to make it safer for cyclists and pedestrians. These business owners, including Nick's very own Howard Schindler seem to be stuck in the 1970s in their vision of transit. Even though a full 80 percent of people visiting Polk street arrive on foot, Bike, or transit, their main interest appears to be to save a few parking spots.

After finishing our meal and starting up Polk street, only a few blocks from Nick's, a driver kicked open his door nearly striking my companion in a manner nearly identical to the way I was doored back in 2009. A few blocks later another car nearly caused another accident. This time, a car almost turned into a cyclist in a move that could be chalked up to blindness, drunkenness, or simple negligence. It didn't need to happen. Mind you, I've seen cyclists behave in the same way, but this whole situation can be avoided with streets that serve everybody's needs. See San Francisco Bicycle Coalition's information about Polk street here.

Others don't see a problem here and they are certainly entitled to their opinion. But I'll be taking my business to places that care about my safety and well being. Good luck in the 20th century guys.